This was another great month of recipes.  I've ranked them from most to least favorite, but even the last one I enjoyed and wouldn't mind making again. 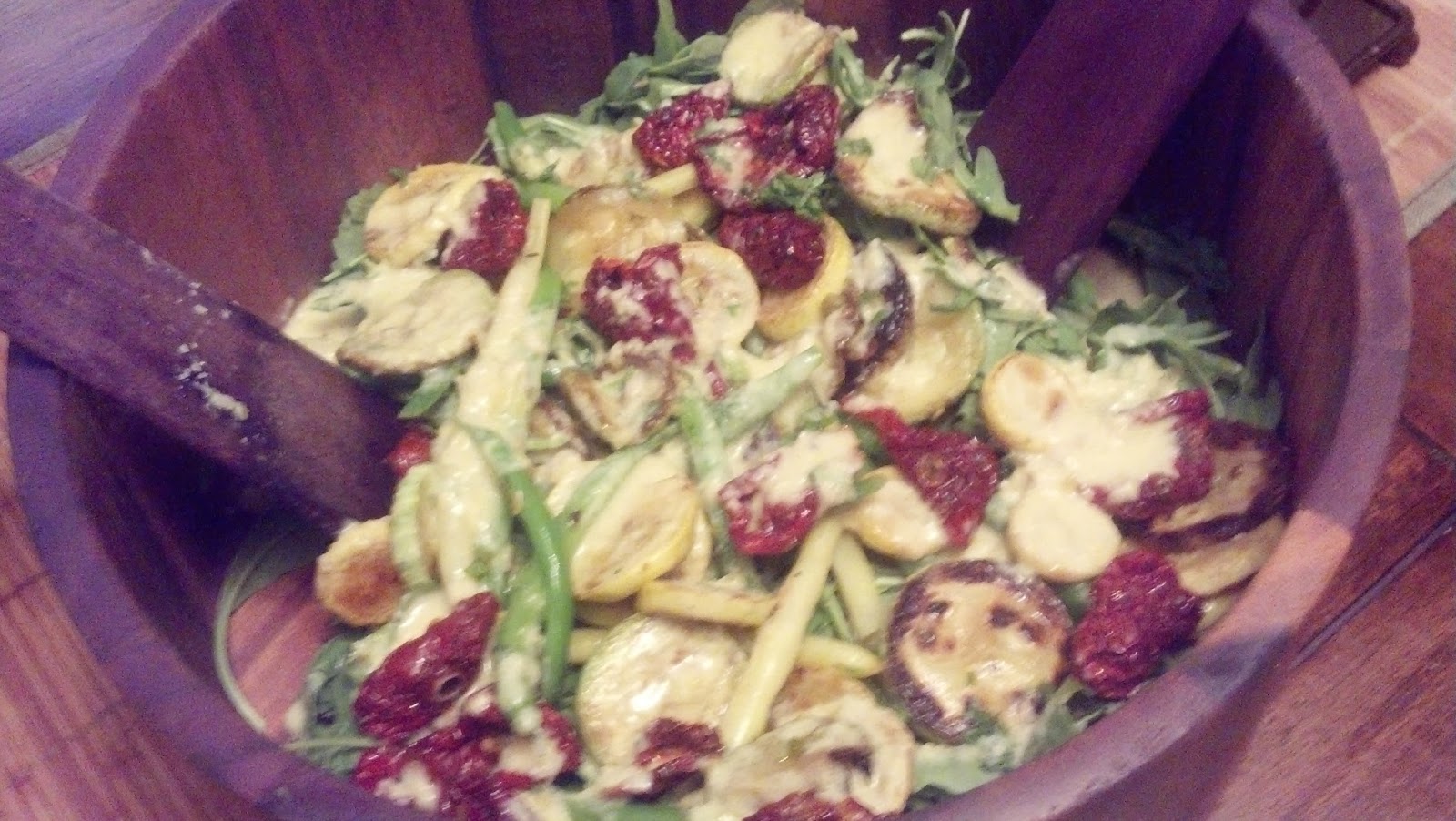 I loved the flavors of this, it was quicker and easier than I thought it would be, and I loved how interesting it was.  It would never have occurred to me to make a salad dressing out of tahini and orange juice, but with the more substantial vegetables used here it really worked.  I used arugula as the base and thought the bitterness was a nice contrast to the sweet dressing. 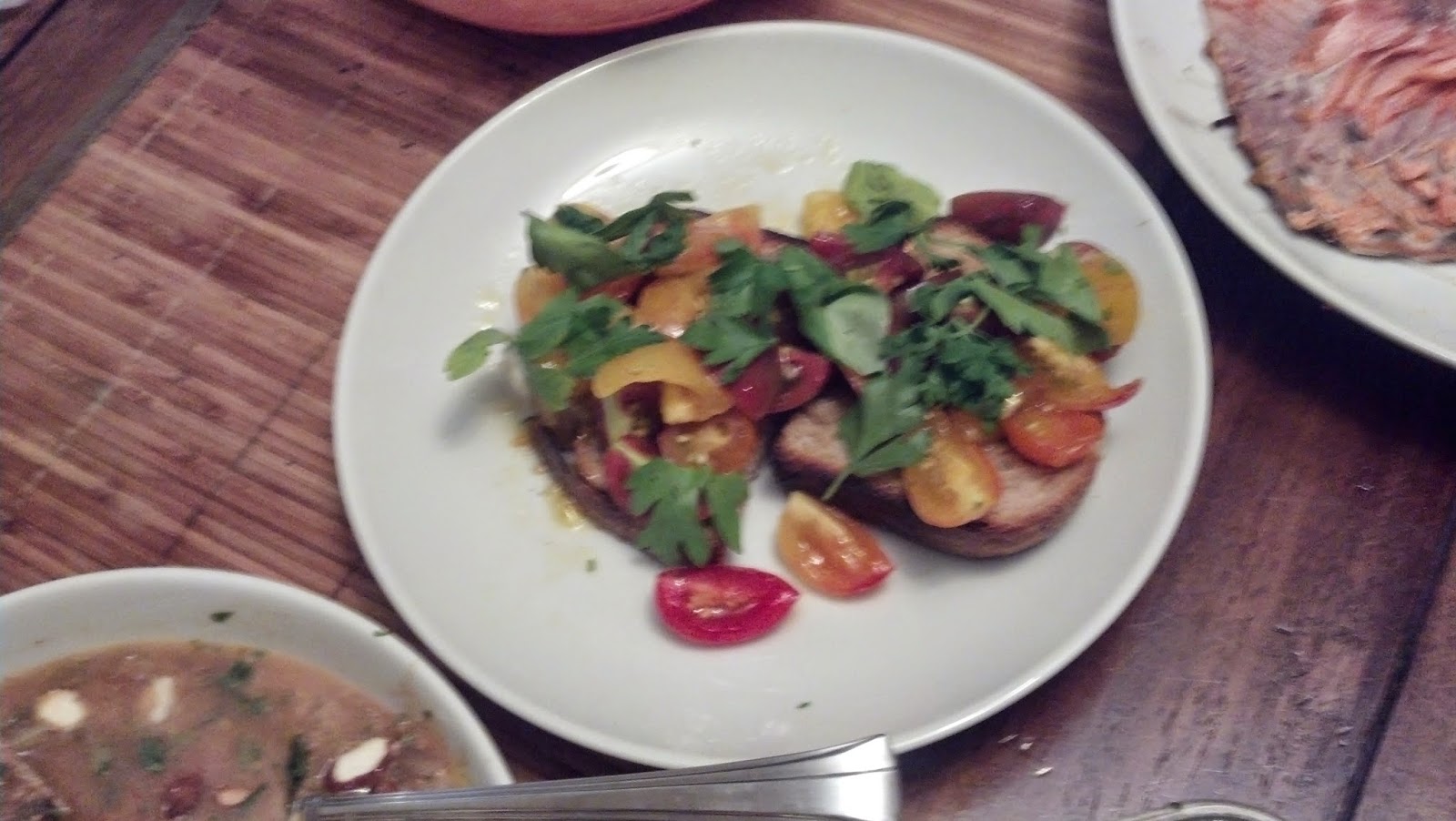 With homemade, freshly baked sourdough bread and fresh summer tomatoes, I think it'd be impossible to go wrong.  This was easy and delicious.  I'll definitely make it again soon. 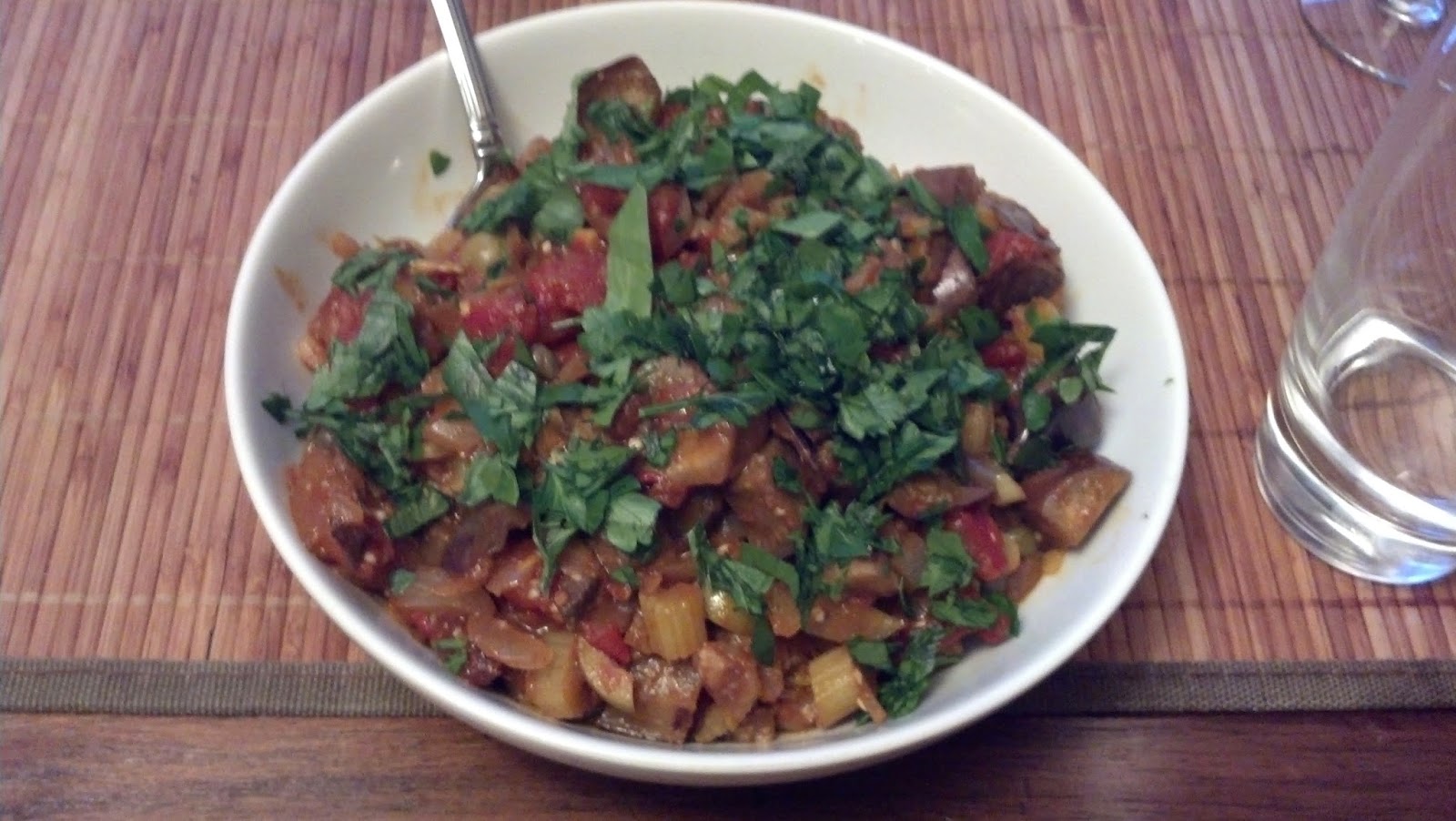 I  know many people don't like her (for some good reasons), but I'm not embarrassed to say that my usual caponata recipe is Rachael Ray's.  I started making it when I was in graduate school.  I liked that it was relatively quick (I can't actually make it in anywhere close to 30 minutes, but it does take me less than an hour) and makes a huge batch.  Per Rachael's suggestion, I'd serve it with polenta the first night, and then later in the week as part of a quick pasta bake.  I really enjoy it, and still make it occasionally.  This recipe was slightly more time consuming, but definitely better.  I think frying the eggplant separately really improves the texture--there's more of a contrast.  The flavors are also excellent.

#4: Pasta with fennel, rocket and lemon 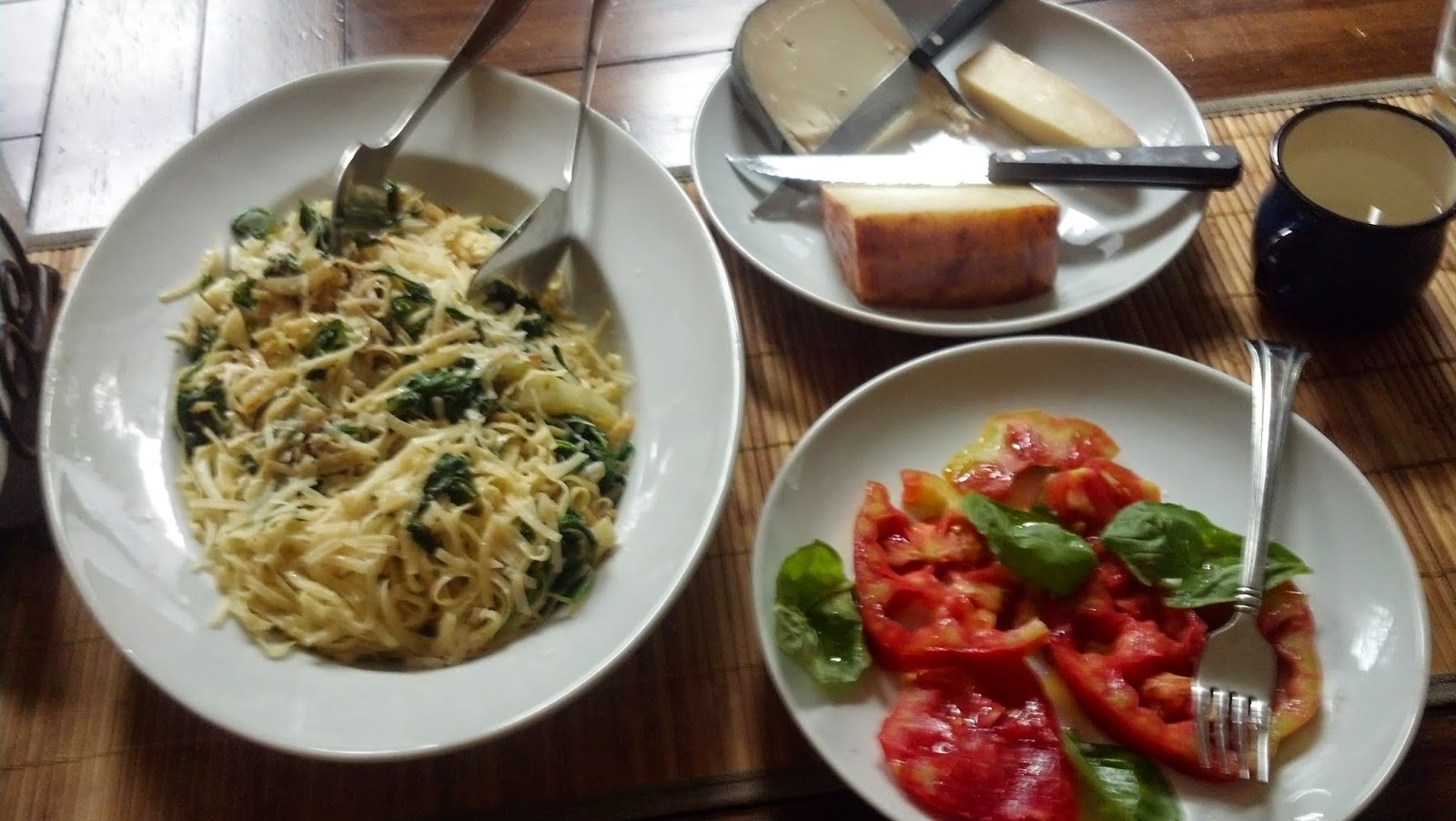 Fennel is the vegetable that I'm still learning to enjoy.  I still don't love it raw, but caramelized and tossed with pasta, arugula, lemon, and cheese, I thought it added a lot of flavor to this simple pasta dish.  I served this with sliced tomatoes and cheese.  Another perfect, easy summer dinner. 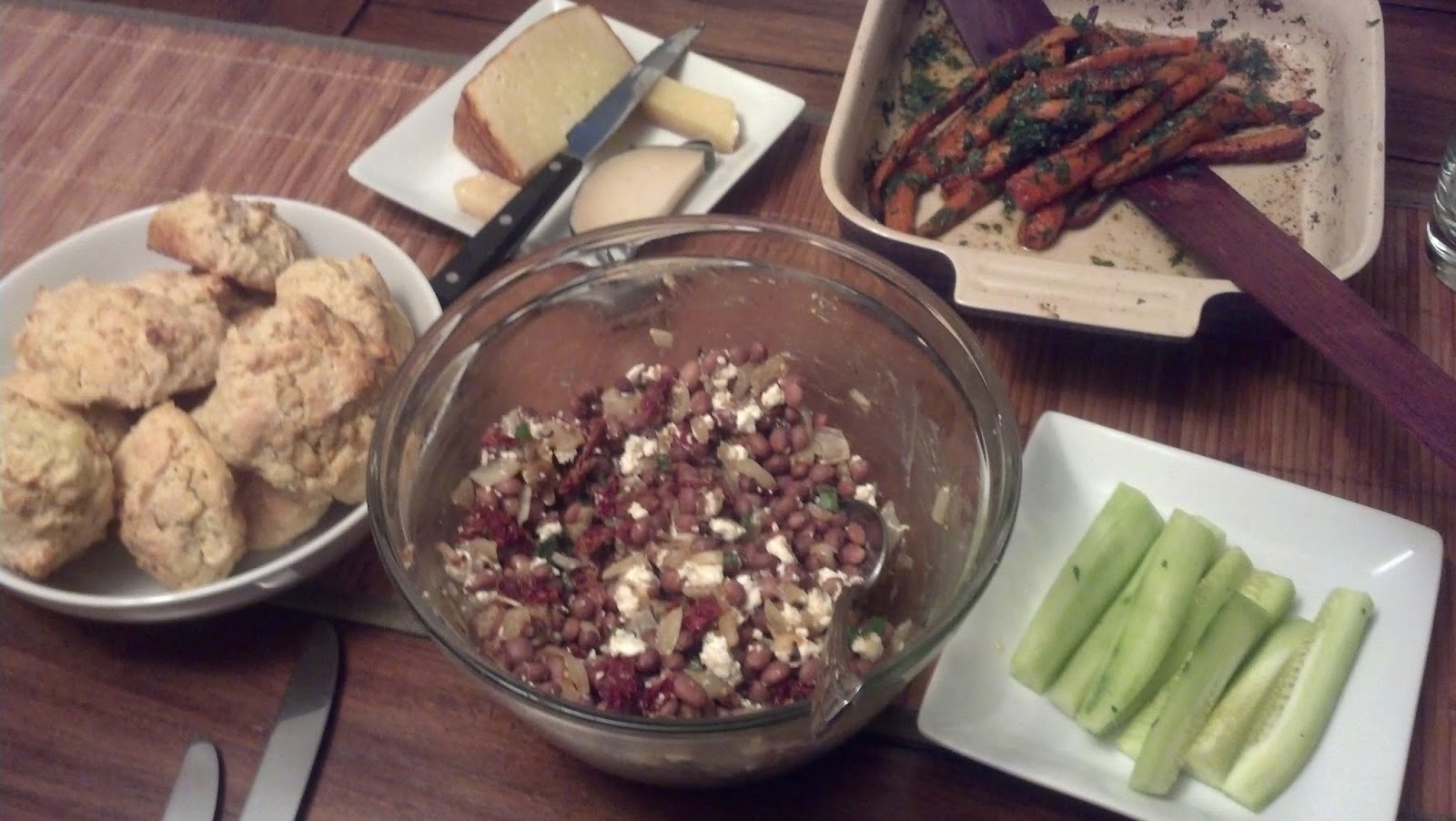 My only complaint with this recipe is that it didn't make enough.  I was amazed by how much the carrots shrunk.  Paul and I were almost fighting over these!  I love roasted carrots, I definitely don't make them enough, and the lemony gremolata sauce was a very nice touch.  We enjoyed these for dinner with powder biscuits (hopefully I'll get around to writing those up for TWD eventually), cheeses, cucumbers, and a salad with beans, feta, and sun-dried tomatoes. 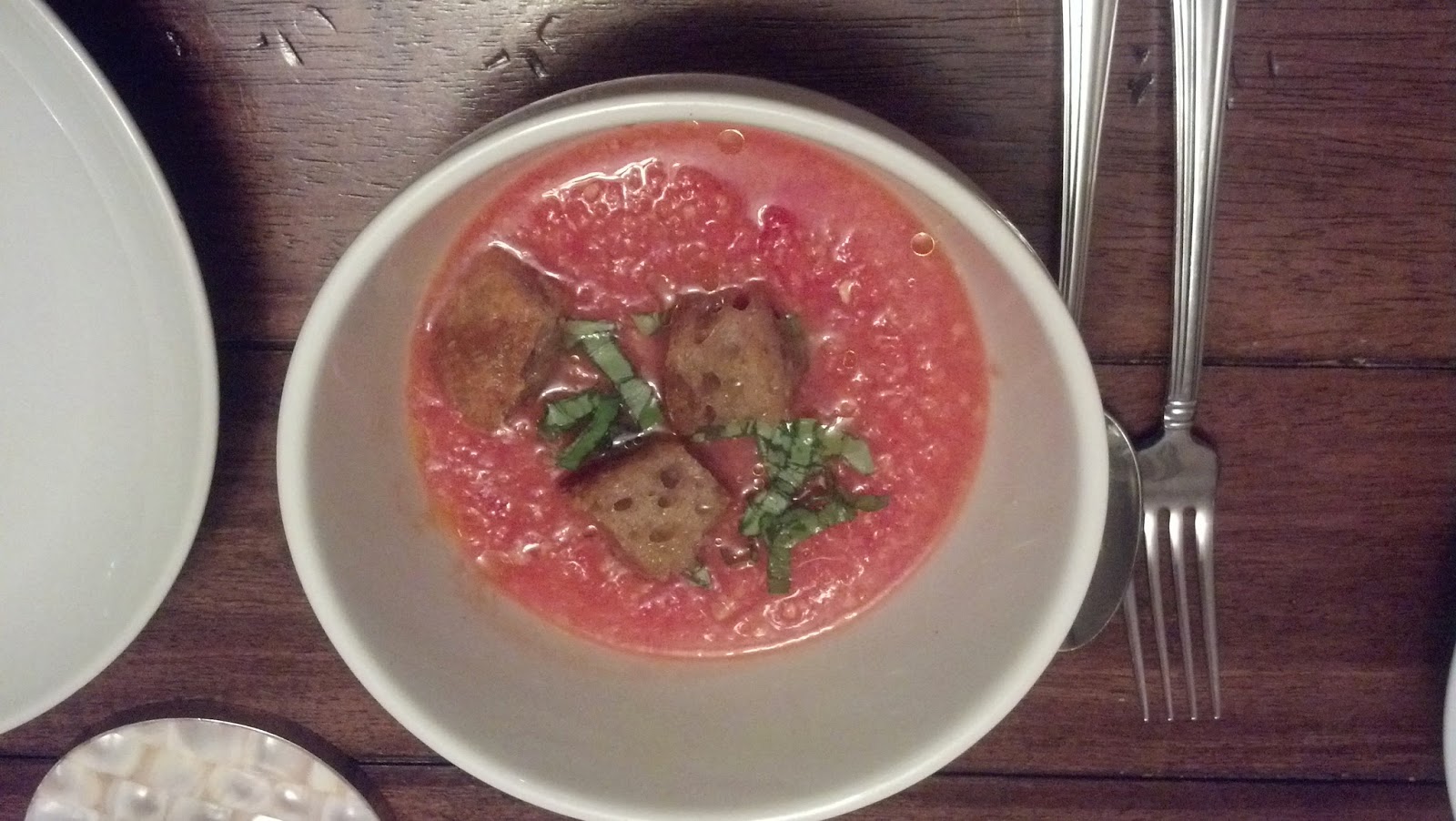 Paul loved this.  I agree that it is excellent gazpacho.  The flavors are very clean and bright, and the crouton on top added a very nice texture and temperature.  The only problem is that, no matter how hard I try, I'm just not a big fan of cold soups.  I was happy to eat this, but didn't love it. 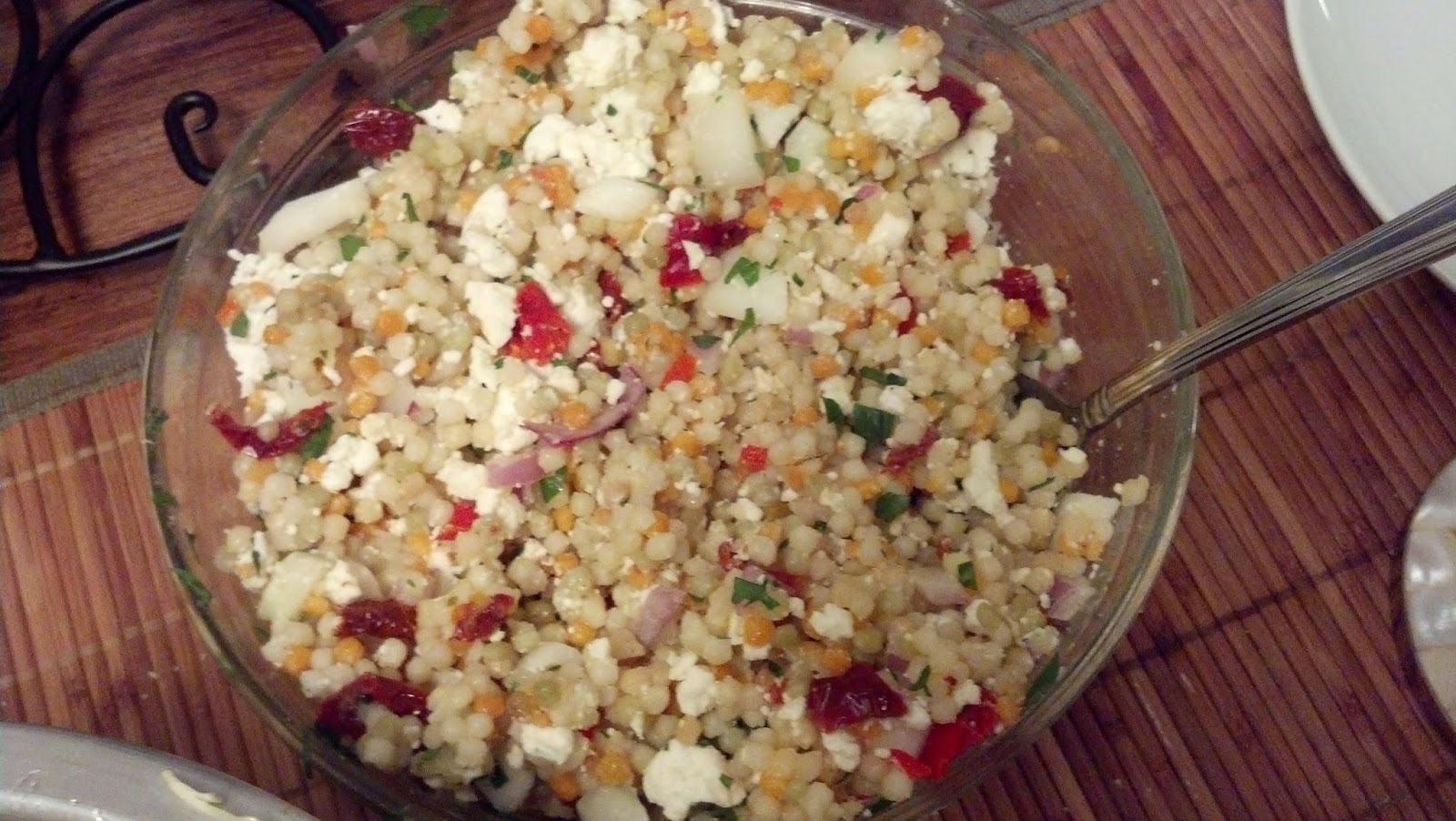 We recently made a couscous salad for FFWD.  I wanted to make it healthier, so I used freekeh instead of couscous.  I considered making the same substitution here, but I was kind of tired of eating freekeh (the FFWD recipe made a huge batch), so I went with Israeli couscous this time.  I also didn't have any jarred roasted peppers and was too lazy to make my own, so I substituted some sun-dried tomatoes and some peppadew peppers that I had in the fridge.  I really liked the combination of flavors here, and how easy this was to put together. 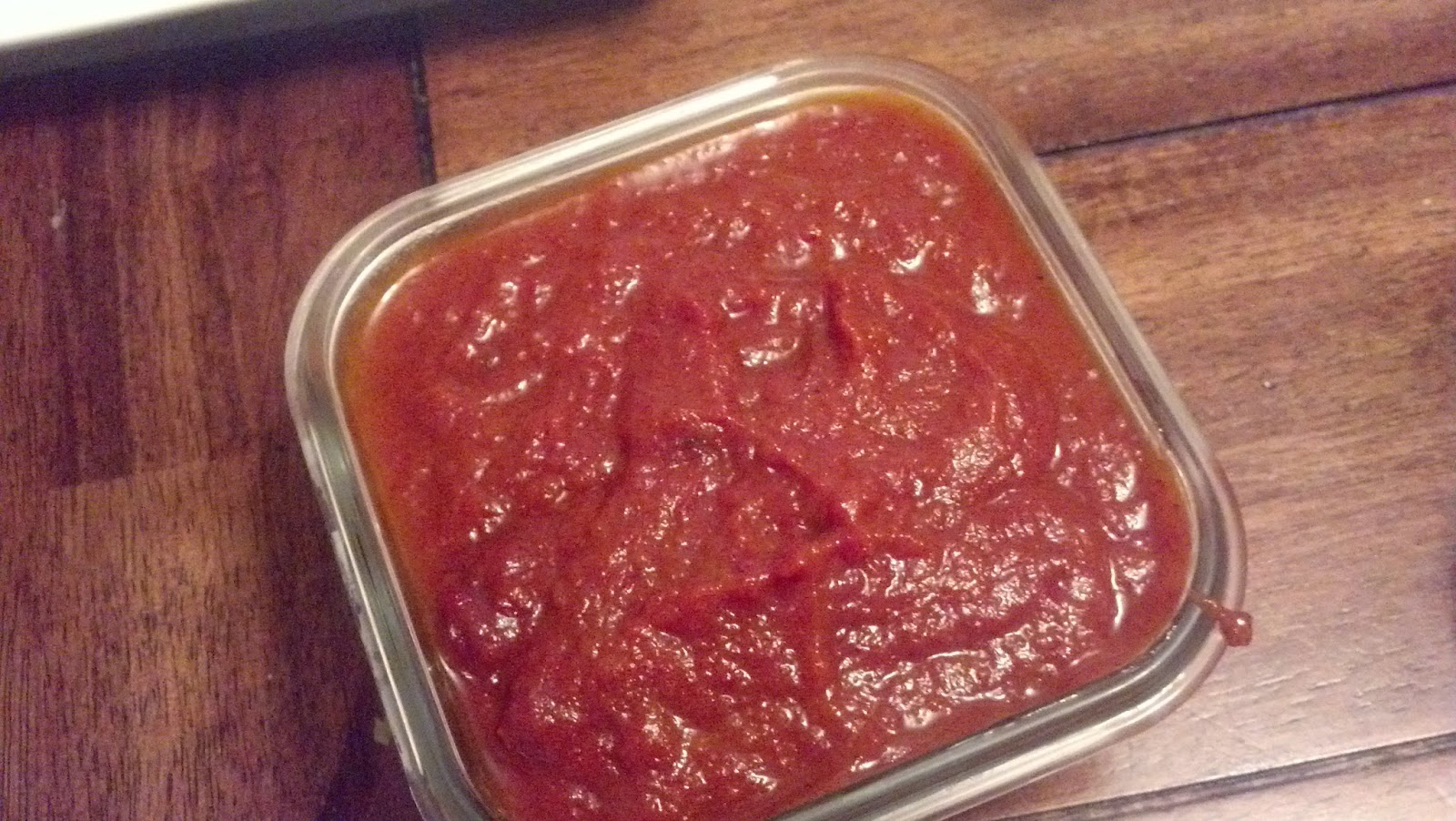 What a great way to use up tomatoes!  Paul's garden is really starting to produce, and this was a great way to make a big dent in our bowl of tomatoes.  It was a perfect use for some of the dented ones, too.  I'm not sure what we're going to do with all of this ketchup (we don't eat it very often), but I do know we'll enjoy it on our grilled turkey burgers this weekend.  (Before Charlotte we used to go camping Labor Day weekend.  This year we're renting a cabin that's in the campground of a state park at the beach.  I'm VERY excited!) 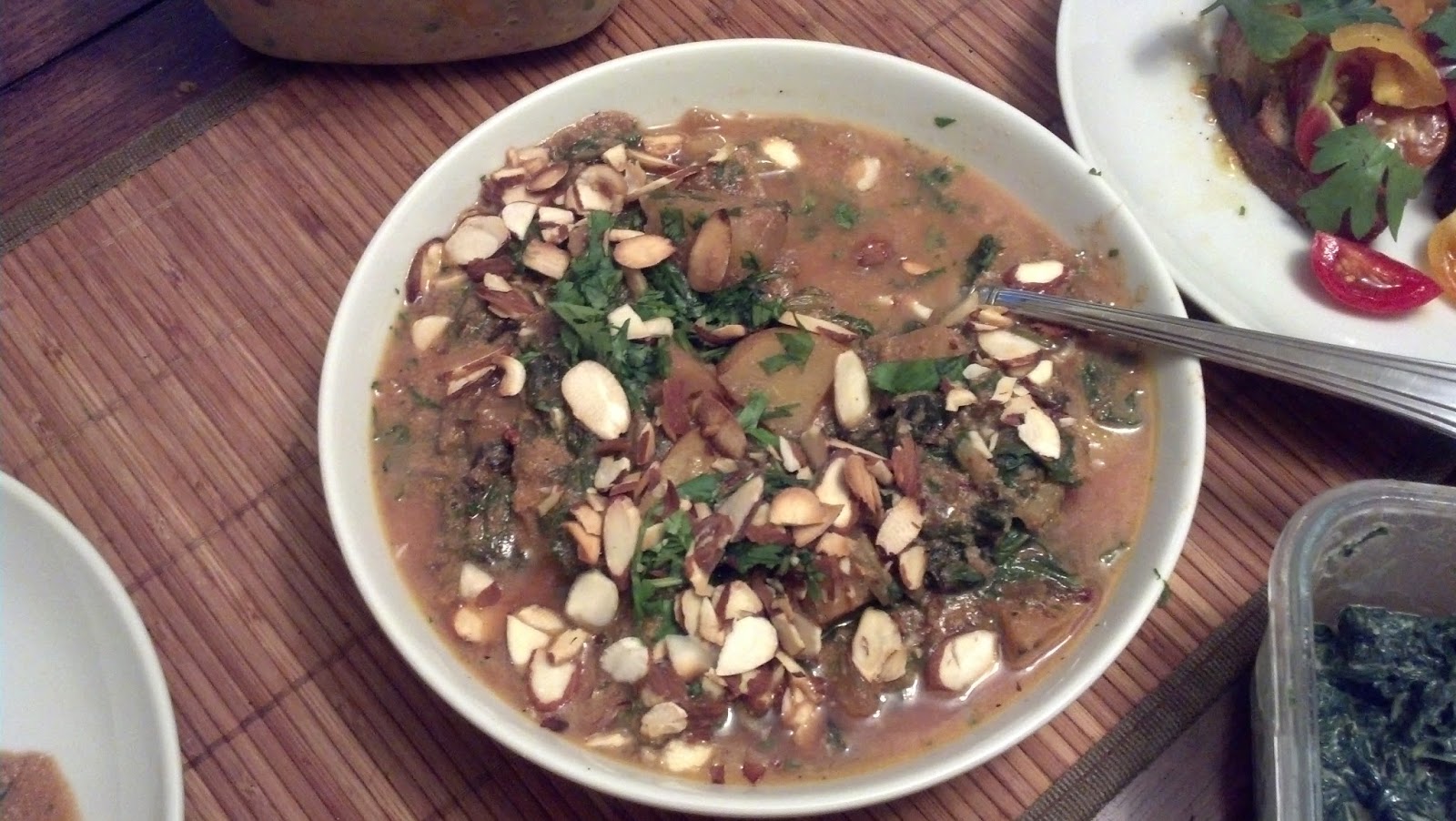 I made this at the beginning of the month and don't remember much about it.  (I need to start writing these posts as I actually make the recipes.)  It was good, we enjoyed it for dinner with the tomato bruschetta, but I didn't think it was particularly exciting.  It definitely isn't the first recipe I'll look for the next time I want to make curry. 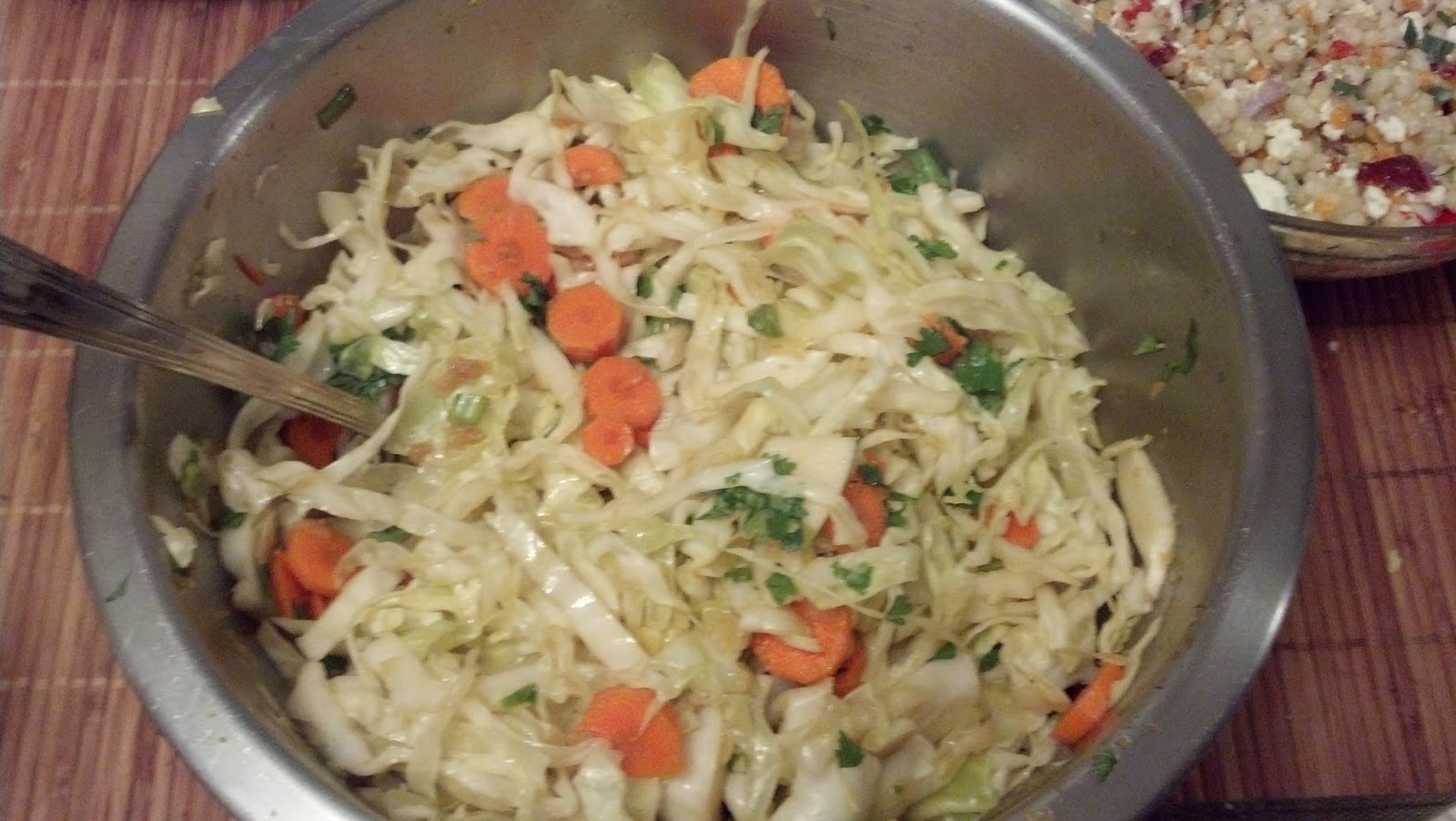 I don't know why I'm not more excited about this recipe.  I like coleslaw, I like Asian-flavored coleslaw, and this was a good recipe for it.  I just can't get excited about eating the leftovers from this one that are still sitting in my fridge.  Maybe the recipe's only problem is that it made too much?  I'll be curious to see what everyone else thought.
Posted by Jora at 3:54 AM 7 comments: 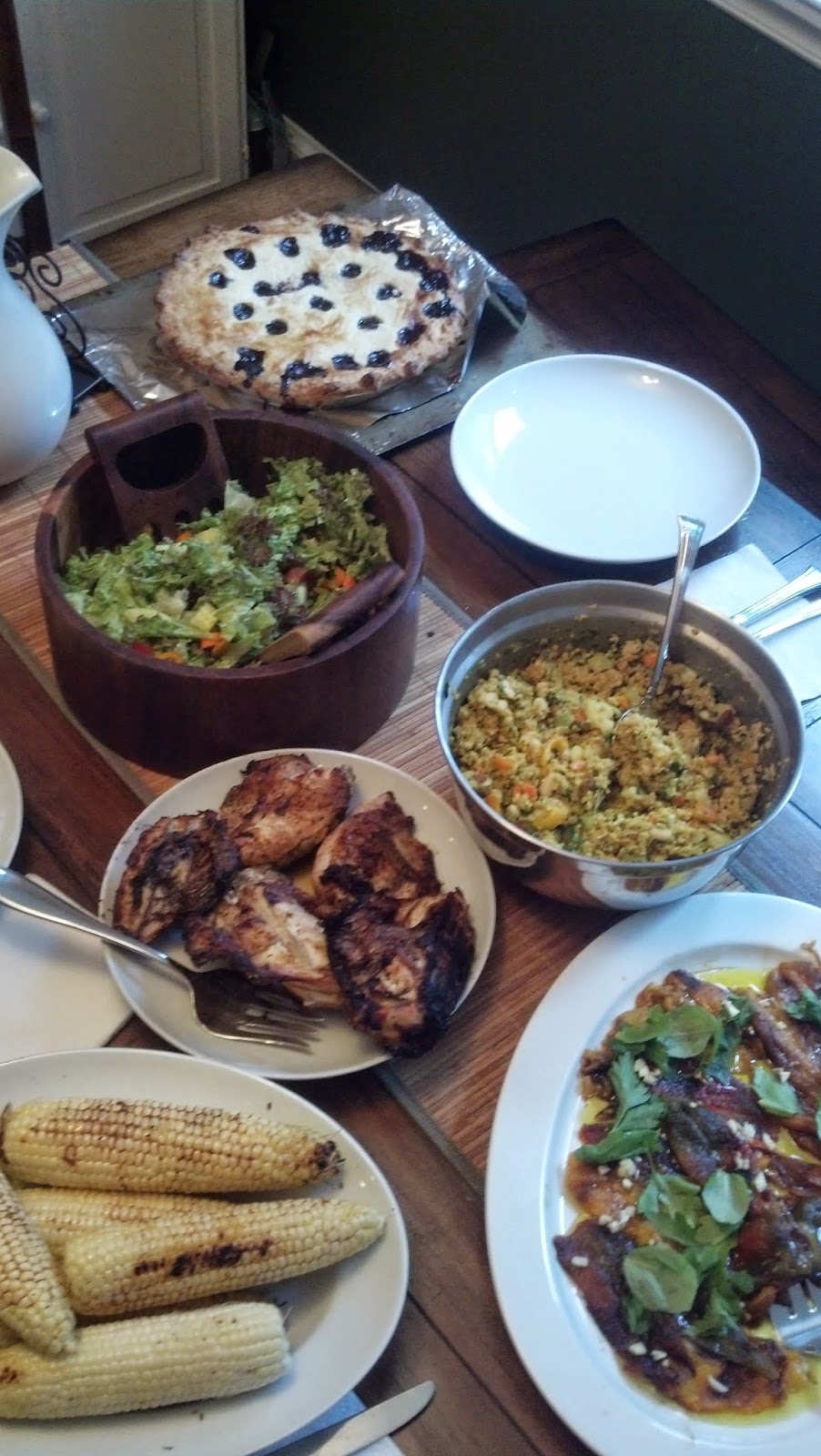 You know what they say about the best laid plans?  Last week the three of us spent six days in Chicago.  Paul and I both lived in Chicago for a long time.  I went to college and graduate school there and it's where we met, and so we're always looking for excuses to go back there.  Last week my family threw an 85th (!) birthday party for my grandma in Chicago, so we decided to make a vacation of it.  Knowing that I'd be away, I made the couscous and red peppers a couple of weeks ago as part of a family dinner.  I thought that way I could be sure to get both posts up on time.  Oops!  It turns out that vacationing with extended family and a 14 month old is anything but relaxing.  We had a lot of fun seeing friends, family, and the city (Chicago will always be my favorite), but there wasn't a lot of down time.  When I did have time to sit, I found myself catching up on work, reading my book, or doing Red Eye*** crossword puzzles with Paul.  So, my blog post didn't get written.  Then last night Charlotte had a touch of insomnia and kept us all up from 11PM-3AM, so now I'm late with this post too.  Oh well!

I served the couscous and red peppers with grilled chicken and corn, and salad.  My mom made blueberry pie.  Everybody loved the peppers (except for my picky father who doesn't eat them).  Next time I make them I'll use the grill instead of the oven (so much easier in the summer), but these were a definite winner.  The couscous salad was okay but not as good as the one I made for CCC, which I'll be writing about soon.  If I made it again I would definitely halve the recipe.

***The Red Eye is a free, abbreviated newspaper put out by the Chicago Tribune.  It's similar to the Express in Washington.  Do other cities have these types of papers?  The Red Eye's crossword puzzles are the easiest I've ever found, and the only ones that Paul and I are actually capable of completing. 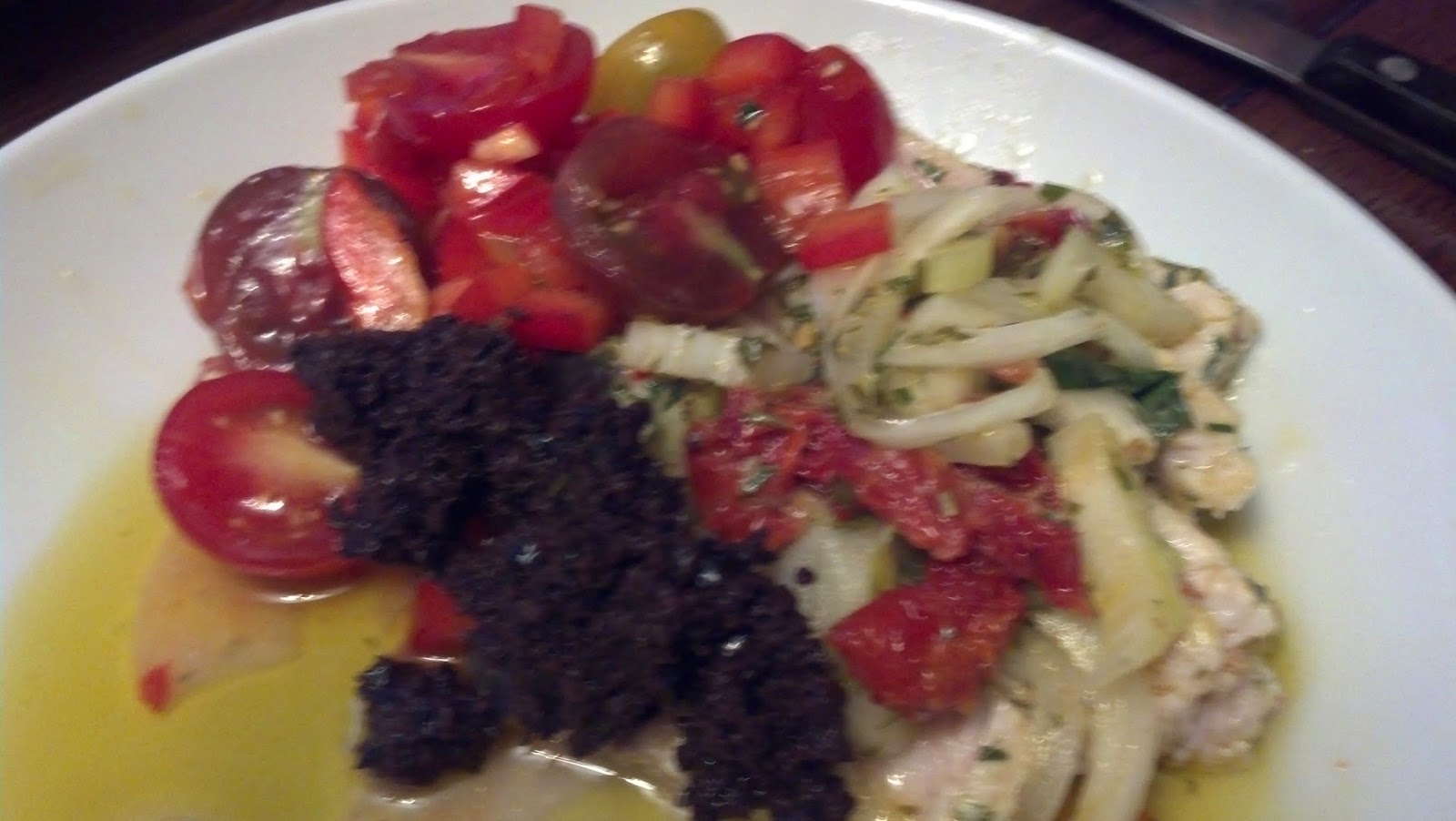 A while ago I made preserved lemons and put them in the refrigerator.  It's probably a bad sign that I can't remember how long ago it actually was, but probably before Charlotte--who is 14 months old this week--was born.  A couple of week ago I was cleaning out the refrigerator, and decided to throw the last couple of lemons out.  I didn't check to see if they were bad (I'm guessing they were probably fine), but decided that they were old enough, taking up space, and easy enough to re-make.  How angry was I when, literally two weeks later, I realized that we had a recipe calling for preserved lemons?!?  I had kept them in my fridge for at least a year, and threw them away just before actually needing them.  I was so angry at myself.  By the time I realized, it was too late to make a new batch, so I tried to find some at my grocery store.  The only thing that I could find was some olives on the olive bar that had small bits of preserved lemon mixed in.  I bought some of the olives, picked out the bits of preserved lemon, and used the juice and lemon bits in the recipe.  It wasn't the same--I really didn't have enough--but at least we got some of the lemon flavor.  Other than that, we loved everything about this recipe.  I love that it has to be prepped ahead of time.  I'm so appreciative now of recipes that can be made whenever I'm free.  It also wasn't too hard, and was absolutely delicious.  I used swordfish instead of tuna (it was on sale), and think this could work well with a variety of fish.
Posted by Jora at 12:00 AM 12 comments: 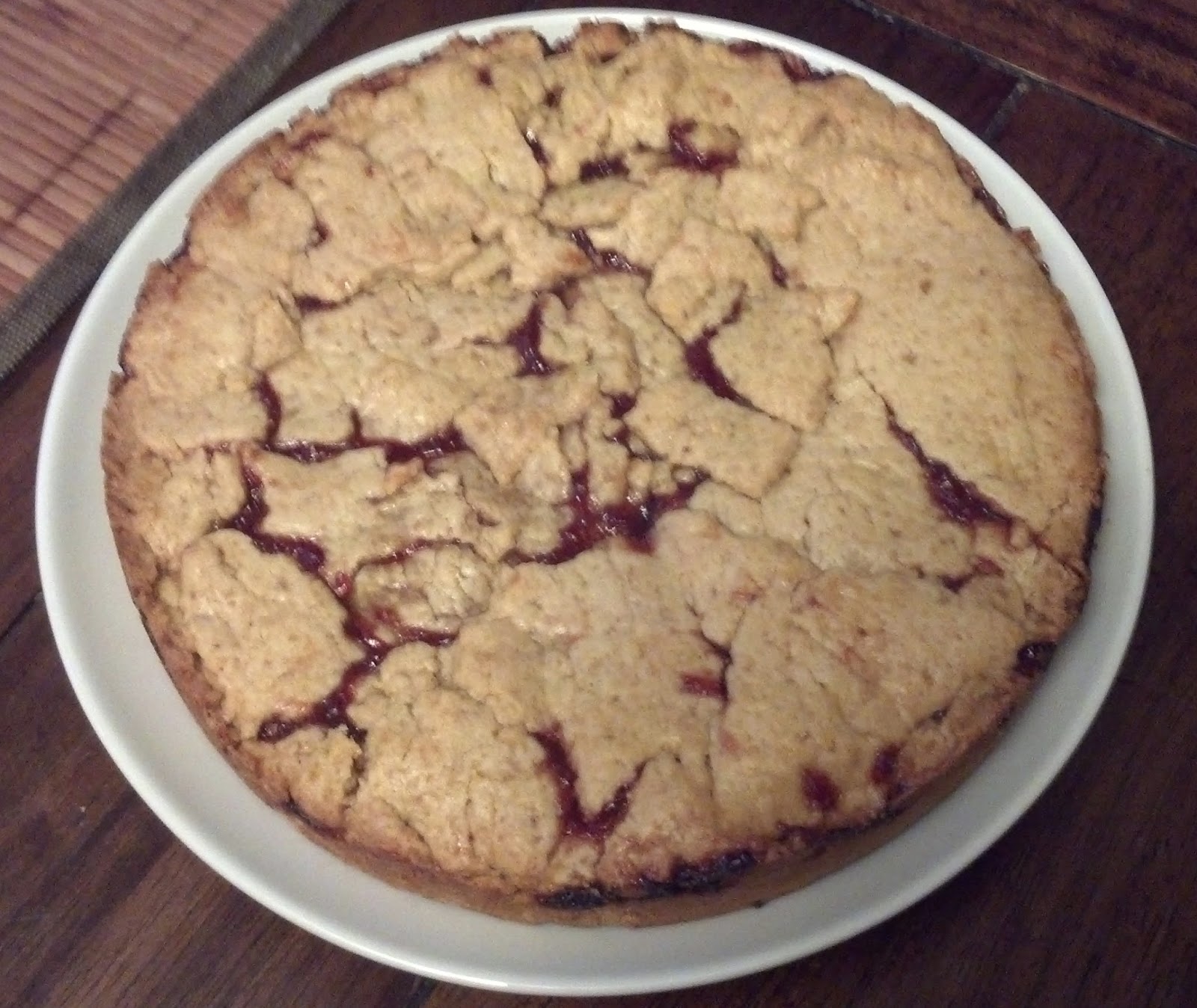 This wasn't one of my better moments.  I made the dough a few days ago.  It was easy nice.  Instead of placing each rolled out round between two pieces of was paper I--stupidly--decided to conserve on wax paper by only using three pieces for the two disks of dough: one on top, one in the middle, and one on the bottom.  I think my cheapskate husband is starting to rub off on me!  Then, because I knew the dough would be in the fridge for a while I stuffed the whole thing into a gallon ziploc bag.  In a smarter move, I then decided to make a strawberry rhubarb jam as the filling.  I love dark cherries, but Paul had some rhubarb that I wanted to use up and this seemed like a perfect excuse.  The jam was quick, easy, and delicious.  Then I waited a few days.  Not surprisingly--I really should have seen this coming--even after letting it sit on the counter for a while to soften, it was impossible to separate the two disks of dough without completely tearing them into pieces.  I was able to patch the bottom one back together in the tart pan, and then covered it with jam.  In hindsight, I should have tried patching the top one before I placed it in the pan, but I just wasn't thinking.  I put the pieces on top of the jam, and then tried patching them together.  Hah!  It was impossible.  The jam just kept leaking everywhere.  I finally gave up.  Once I decided that wasn't going to work, the egg wash and pretty pattern seemed like a waste of time too.  So here we have it.  I won't even call this a gateau basque.  It is a (very) rustic jam and cookie sandwich.  I liked it for dessert last night, Paul thought it was only okay.  Cold from the refrigerator it did, however, make a delicious breakfast this morning!