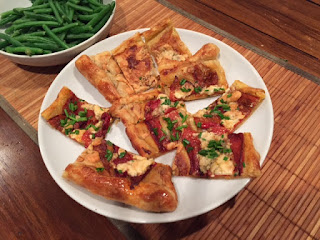 I took a much longer than expected break from blogging, but I missed this cookbook and this group, so here I am.  I'm more behind than I thought I was (I have draft posts from May and June that I never finished!), but I thought I'd just jump in where I am and maybe I'll catch up later.  On a similar note, instead of my ambitious attempts to make all of the recipes every month, my new goal is to make one recipe a month with the group for the rest of the time.

Our second daughter was born on Halloween, and I'm still struggling to figure out how to make dinner with two kids around.  I selected the Blue Cheese and Chive Tart to make this month because it sounded so quick and easy.  It was.  I love this technique.  I defrosted some frozen puff pastry (I actually think I made it myself, embarrassingly I can't remember when) in the afternoon, and in the evening I was able to prep the rest of the recipe in the time it took the oven to heat.  I even had time to steam string beans and feed Miriam while the tart baked.  In the spirit of being seasonal (and maybe inspired by my laziness) I skipped buying tomatoes and replaced them with some roasted red peppers that I made and froze this fall.  The tart was delicious.  Paul and I loved it.

(Amusing side note:  I didn't think Charlotte would like the red peppers, so I left them off of one corner of the tart and just put blue cheese, which I know Charlotte likes.  She tasted the tart and liked it--she definitely lets us know when she doesn't like something--but for some reason after two bites only wanted to eat green beans for the rest of her dinner.  Paul and I were sitting there begging her to eat some puff pastry as well, and laughing about how most kids would happily eat the puff pastry while their parents begged them to eat green beans.)

UPDATE:  Andrea was nice enough to ask for a photo of Miriam.  (Who doesn't love being asked about their kids?)  Here's one of Miriam and another one of both girls. 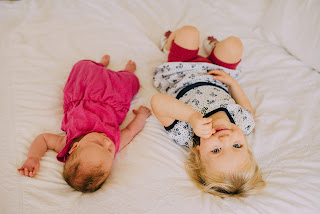 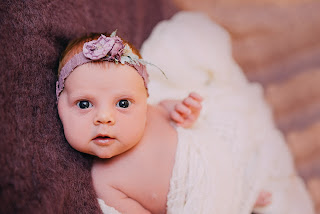