This post didn't involve any cooking or even photographing, but was still probably the hardest to write.  Choose only 5 favorites?!?  First I went through the book and listed potentials.  My goal was to find recipes that I really thought were special to AMFT.  I absolutely love eclairs, but I've made excellent eclairs from several cookbooks, so those were out.  When I got through the book I had a list of 14 recipes.  Second, I cheated and looked ahead to the next celebratory weeks.  Roast Chicken for Les Parasseux was a definite contender, but I know it'll be my play-it-again recipe, so I decided to save it for later.  Then, I did the best I could to choose 5 from what was left.  Here they are:

#5) I remember when I made the Cheese-Topped Onion Soup that I was hoping not to like the recipe.  It's a lot more work than my usual onion soup recipe, and I was hoping it wouldn't be worth it.  It totally was!  We both absolutely loved it, agreeing that it was much better than my usual onion soup.  It's a little hot for soup in DC right now, but this is definitely a recipe I'll turn to again and again in the fall and winter months.

#4) Anybody who knows me shouldn't be surprised that two out of my five favorites are desserts.  (And it was hard to limit myself to just two!).  I've had a lot of apple cakes, and Marie-Helene's Apple Cake is definitely my favorite so far.  I loved that it really just tasted like apples, with enough butter and rum to hold it all together.  Another recipe that I'm looking forward to making this fall!

#3) The Deconstructed BLT and Eggs will always hold a soft spot in my heart because it's the first recipe I made with the group (and my first-ever blog post).  It's also one that I love.  Especially in the summer, this is my favorite way of eating.  It feels relatively light because it's a salad, but has delicious bacon and eggs on top.  At least in my book, it needs nothing else but bread or crackers to feel like a complete meal.

#2) I never would have predicted this, but I think the most revelatory dessert in the book for me was the Floating Islands.  We aren't big fans of meringue and I didn't expect to really like these, but they were absolutely delicious.  I just couldn't get enough of the contrasting textures.  I served these with poached figs, but I think they'd be good with absolutely anything.

#1)  My favorite recipe from AMFT is also the first one that I made, the Pumpkin Stuffed with Everything Good.  I found this recipe online before I owned the book, I think it may have been my introduction to Dorie, and absolutely loved it.  It's one of the reasons I knew that buying the book and joining this group was a good idea.  I make it at least once a year, and love it every time.  I know part of it's beauty is that it's completely adaptable, but I usually stick pretty close to the original recipe.  I mean, how could you go wrong with bread, bacon, cheese, and heavy cream?

This walk down memory lane has certainly made me hungry.  I'm sad that we're almost done cooking together, I do hope we'll stay in touch, but I know the AMFT cookbook will continue to get a lot of use in my kitchen.
Posted by Jora at 11:43 AM 16 comments:

FFWD Chicken in a Pot 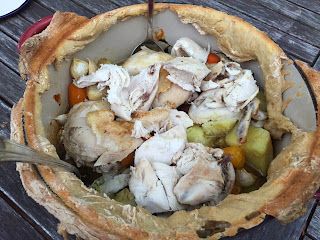 I was a little bit embarrassed to post my picture after I saw some of yours.  I don't know what happened with my flour and water "sausage."  I think I added way too much water.  I was feeling too lazy to measure, and stupidly decided to "eyeball" the water.  I clearly went overboard.  I added extra flour, but after seeing how neat and pretty yours are I'm pretty sure I wasn't near the right consistency.  Oh well, the good news is it worked.  When this came out of the oven I asked Paul to get a screwdriver to pry open the lid.  He came back with a crowbar.  That man certainly loves tools!
I also stupidly cut up the chicken and added it back to the pot before taking the photo.  It was so much prettier when it was whole!

We both agreed that this was a perfectly nice Sunday night dinner, but not amazing.  Given the herbs, lemon, and garlic, I was expecting it to have more flavor.  I also under-salted the chicken.  I'll take responsibility, but I really wish that recipes would give amounts for salt (or even ranges) when they involve raw meat.  It's not like I was going to taste the chicken to see if I had added enough salt.  I'm glad I make this, but I think Dorie's Lazy Chicken will still be my go-to roast chicken recipe in the future.

I can't believe that this is our last recipe as a group.  With the exception of a few that I skipped because I just don't eat the main ingredient, I've made all of the recipes except for the Waffles and Cream.  I'm hoping to make those soon, and also to write a catch-up post with all of the recipes that I've made and failed to write about in the last few months.  It's hard to believe that this journey is coming to an end, but I'm thrilled that we have a few more fun weeks ahead of us!
Posted by Jora at 10:28 AM 10 comments: 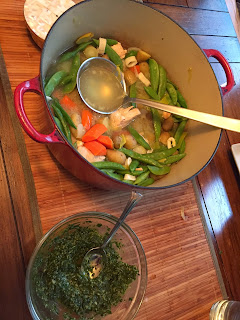 I really, really enjoyed this recipe.  I was feeling kind of lazy so I used a piece of salmon (probably about half a pound) cut into large chunks, and a bag of the Trader Joe's seafood mix (it has small shrimp and scallops and calamari).  I also added extra potatoes and sugar snaps but skipped the mushrooms.  We had basil that was about to turn black, so I made a pesto for the side.  I liked the pesto, but definitely didn't think the dish needed it.  I wasn't sure about the gingered-chicken broth with seafood, but I loved the whole thing.  This definitely needs bread for dipping!

P.S. I feel bad that I've done such a bad job keeping up for the last couple of months, and now we're almost done.  I've actually made almost all of the recipes.  I'll try to get a catch-up post up this week or next.  My excuse is that I'm almost four months pregnant.  Food is finally starting to seem somewhat appealing, but I haven't had much of an appetite the last few months.  Anyway, I'm looking forward to finishing out the next few weeks with the group!  (So hard to believe we're really almost done.)
Posted by Jora at 12:40 PM 11 comments: