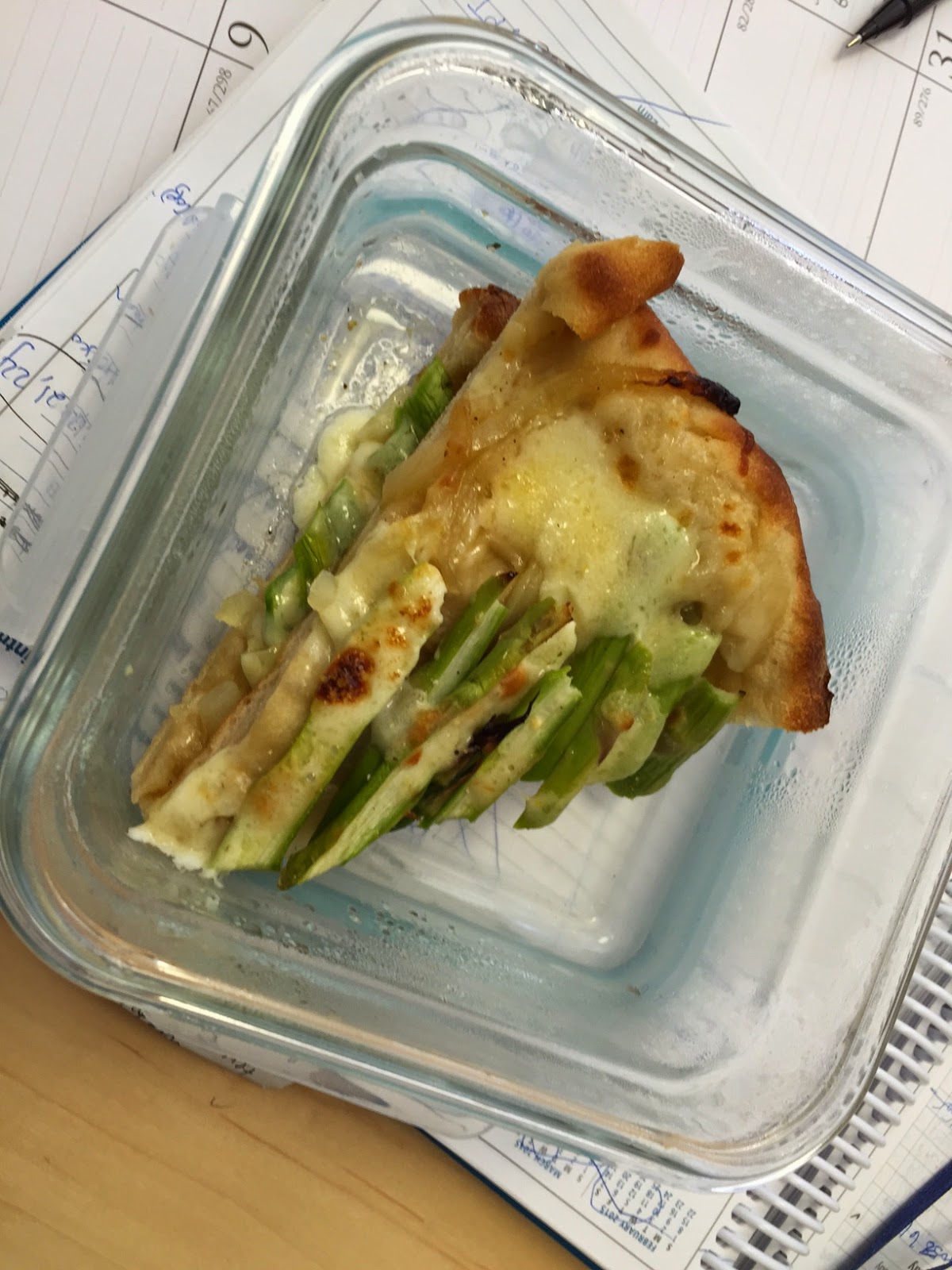 (I cannot for the life of me figure out how to get these pictures rotated properly.  They look correct before I upload them, but then somehow the uploading rotates them, and once they're uploaded I can't seem to rotate them back.  Anyway...)

I think I'm basically caught up with all of the recipes we have made, so I decided to take it easy this month.  We're just starting to see asparagus here--it isn't local, that's still a while away, but at least it's from the US--and so I decided to use it atop the Asparagus Pizza.  We were so busy eating that I forgot to take pictures, so here's a picture of the leftovers I brought for lunch at my desk.  This is becoming a family favorite--Charlotte enjoyed it too.  I imagine I'll make it again before asparagus season runs out. I just finished mixing the Pea and Mint Ice Cream.  It's chilling in the fridge to prepare for churning.  I'll try to post an addendum with a better review once I actually taste it.  I did want to say that I've made both ice creams now, and I really find the custard recipe in this book difficult.  Both times it's curdled long before even starting to get thick.  This means I end up settling for a runny custard, which turns into very ice-y ice cream.  I'm not very good at making custard, and certainly take full responsibility for my struggles, but I have had better luck with other custard recipes.  I'll probably go back to those in the future.

I'm looking forward to getting back in the swing of things next month.  We're finally starting to see some spring produce!
Posted by Jora at 10:06 AM 8 comments: 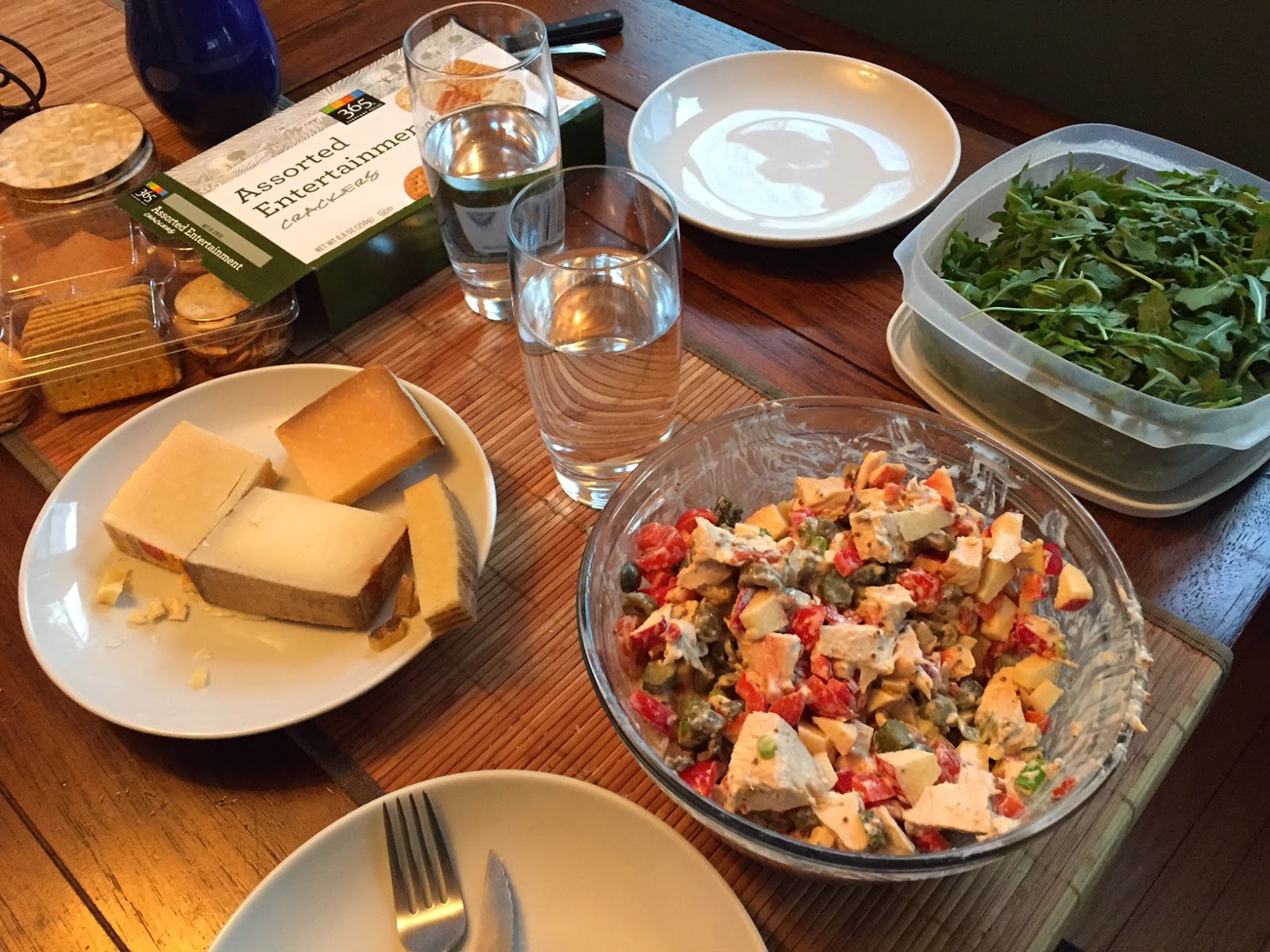 I was tempted to skip this one since I don't eat beef, but the other ingredients sounded excellent to me so I decided to try it with chicken.  I roasted some bone-in chicken breasts the day before, so all I had to do was chop up the chicken and other ingredients and assemble.  Served over arugula, and with cheese and crackers alongside, I thought this made an excellent weeknight dinner.  I loved the combination of salty (olives and cornichons) and sweet (apple and red pepper) with the chicken.  I also used both kinds of mustard and thought that was a must (at least for this mustard-loving cook).  Only Charlotte was not a fan.  She choose to eat her chicken plain.  Oh well.  More salad for us! 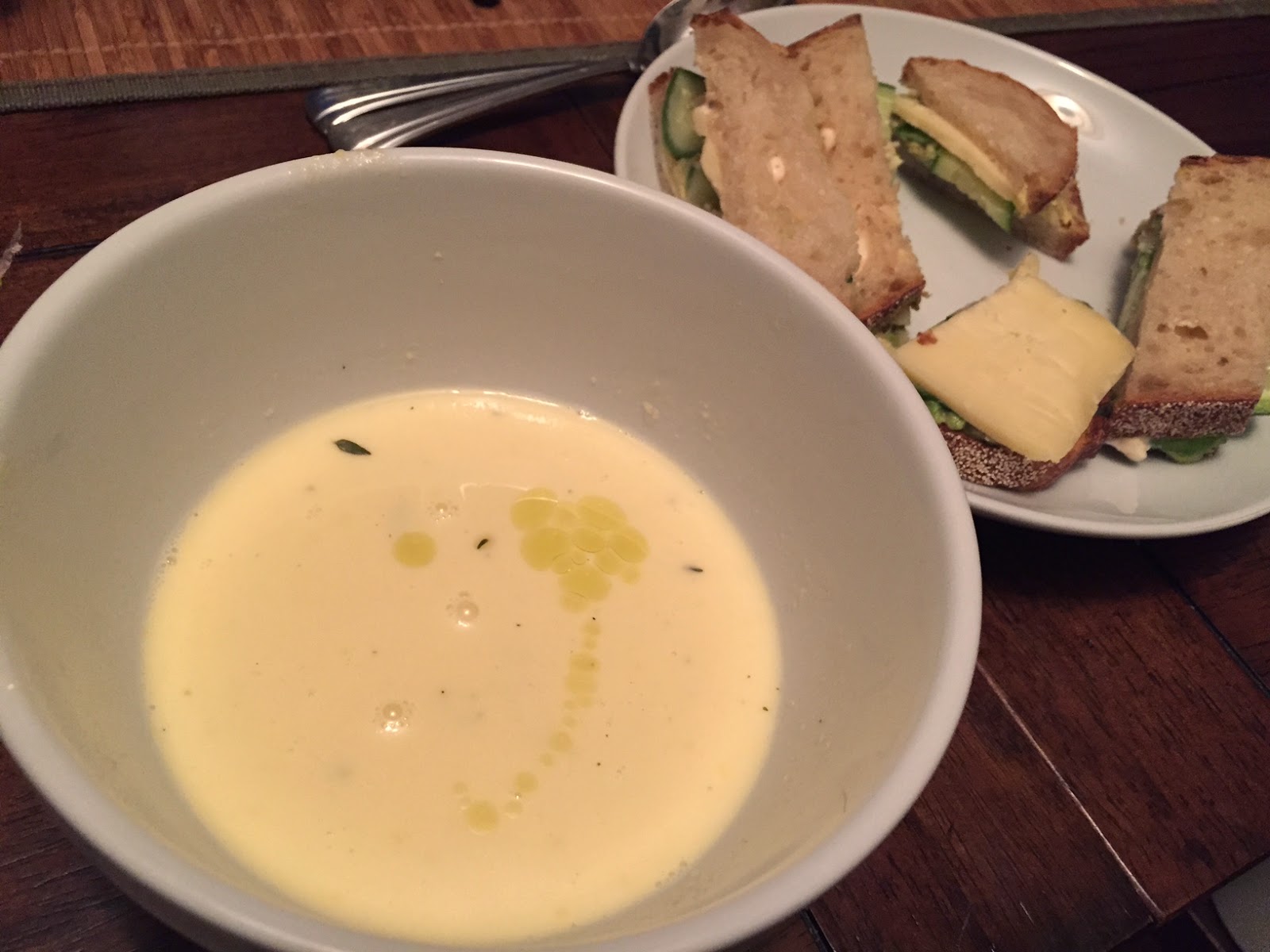 This week I have three recipes to post about.  The only one I still need to make up is the cabbage bundles.  I'm still on the fence about what to do with those.  It will definitely need to be creative.  I made the cure-all soup for dinner one night this week, along with cucumber, avocado, and cheese sandwiches.  Paul and Charlotte both really loved this soup.  I liked it, but did find it very rich.  One issue that I have with parmesan cheese is that one cup can be a totally different amount depending on how you grate the cheese.  I grated it in my food processor, so one cup was an awful lot of cheese.  I have a feeling I would have enjoyed the soup more of I had cut down on the cheese.  I really wish more recipes would give weight measurements for those types of ingredients. 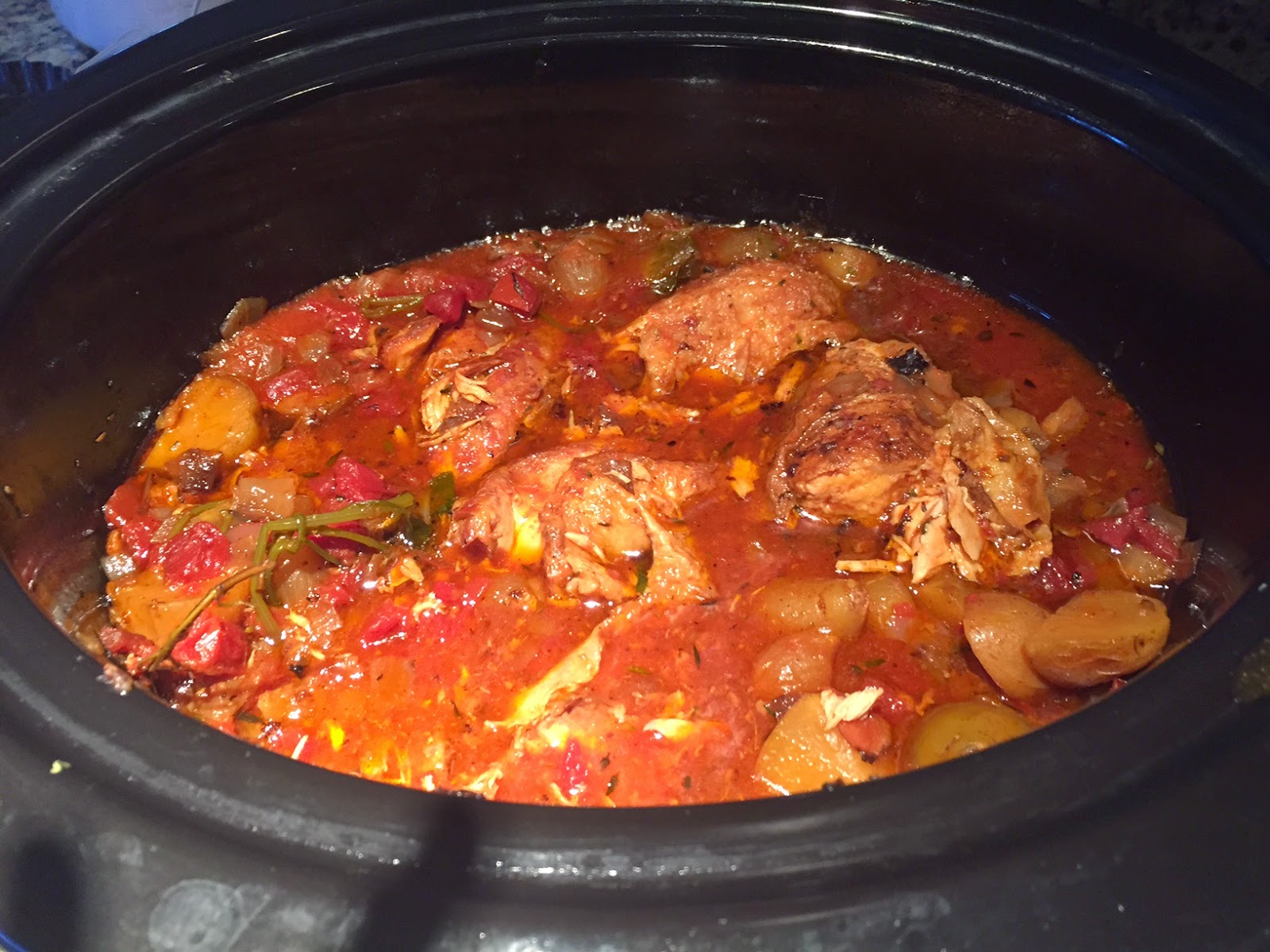 I don't eat red meat, so I decided to use chicken in the veal marengo.  It was a work day, so I followed Diane's lead and cooked this in the slow cooker.  First I chopped the potatoes and put them in the bottom.  I followed them with about half a bag of frozen pearl onions (so much easier than peeling!).  Then, I coated the meat (three bone-in and skin-on chicken breast halves) in flour and browned it in a skillet.  Once the chicken was brown, I added it to the slow cooker.  In the same pan I melted the butter, cooked the onion for five minutes, and added the rest of the ingredients for the sauce.  I scraped all of the brown bits from the pan, and added it all to the slow cooker along with the herbs.  (I was too lazy for a bouquet garni, so they just got thrown in.)  I cooked it for 10 hours on low, and came home to a warm dinner.  I just had to steam some broccoli to go alongside.  Every time I use my slow cooker I wonder why I don't use it more often. 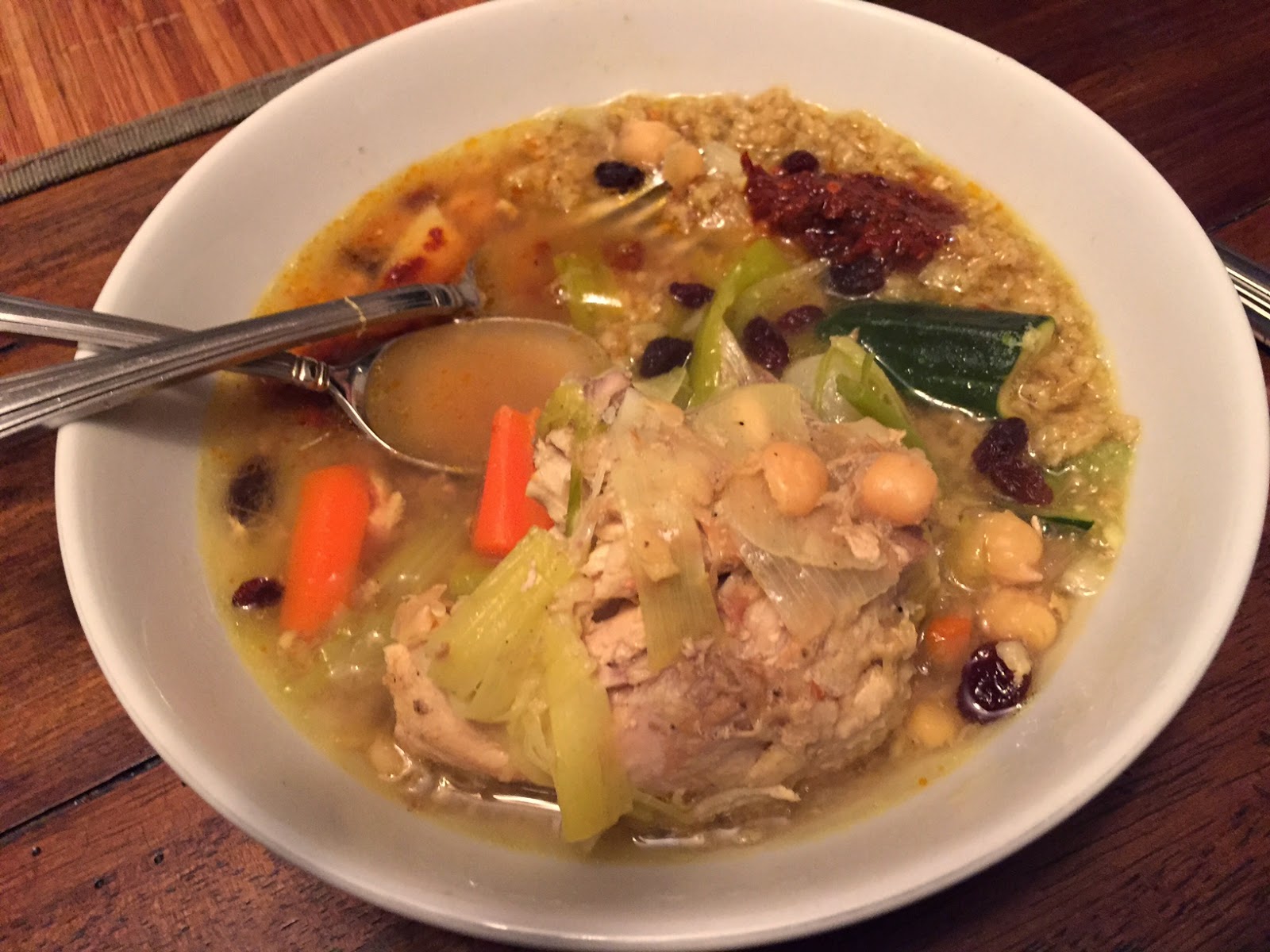 Last, the Chicken Couscous.  I really thought I already wrote this up, but I can't seem to find it.  I feel like I'm losing my mind.  We enjoyed this one a lot.  Perfect comfort food for a cold winter night, and not too complicated.
Posted by Jora at 10:20 AM 10 comments:

What can I say?  I'm almost two days late posting.  I apologize.  It's been a crazy few weeks around here.  Big changes at work, a sick kid, etc., etc...Anyway, the good news is that I really enjoyed all of the recipes this month.  I would happily make any of them again.  They were hard to rank, but I gave it a shot just for fun. 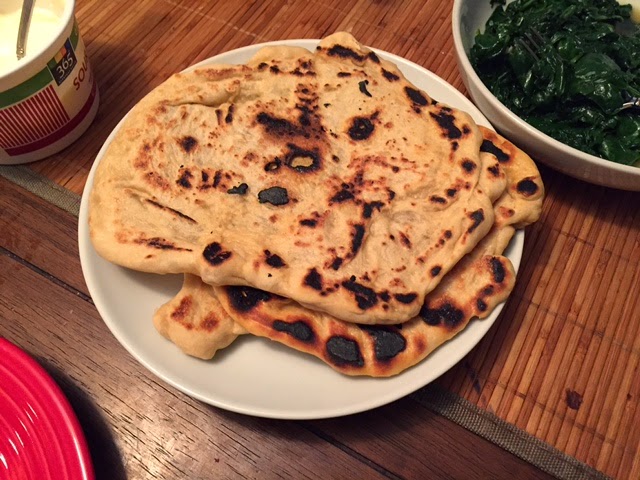 I've made the magic bread dough as a base for pizza many times, but this was my first time making flatbreads.  Brilliant!  In the past I've made flatbreads in the oven.  Between the placing and the re-arranging and the multiple batches and the screaming hot oven I always manage to burn myself--usually multiple times.  The stove top was a revelation.  These were so much easier.  And Charlotte was excited because she thought we were having pancakes. 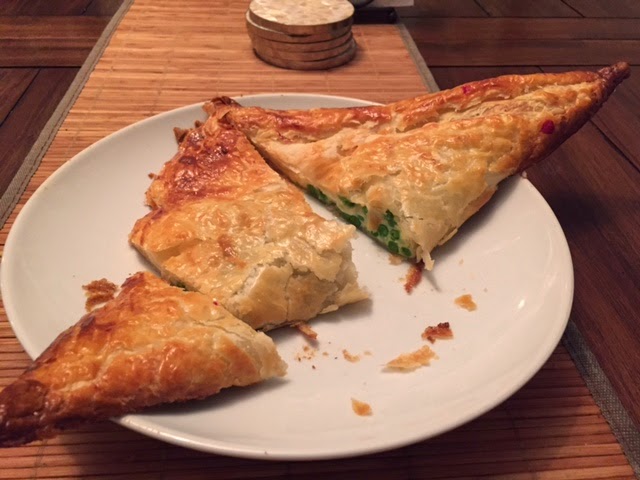 I feel like a broken record, but I think that puff pastry is the answer to most cooking questions.  This was quick, easy, and delicious.  I loved the peas and cheddar combination, but I imagine spinach and feta, sundried tomato and goat cheese, and a host of other things would also be delicious.  The only problem?  I think the three of us could have eaten twice as much. 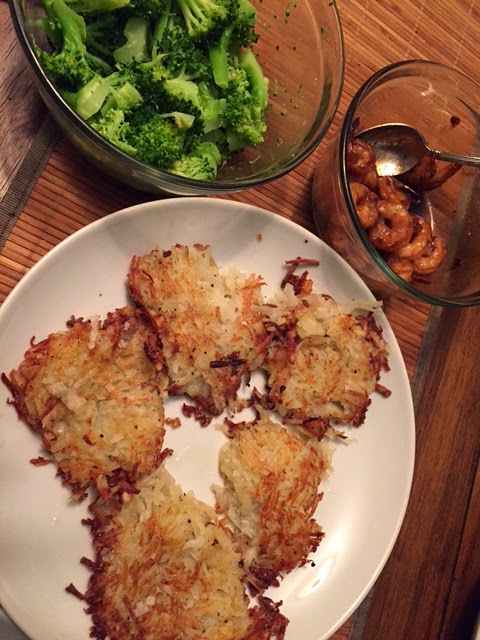 I am no stranger to potato pancakes, making potato latkes at least once a year, but I've never par-cooked the potatoes before.  Another brilliant idea.  It's generally to get crispy outsides but soft insides with potato pancakes.  These were perfect! 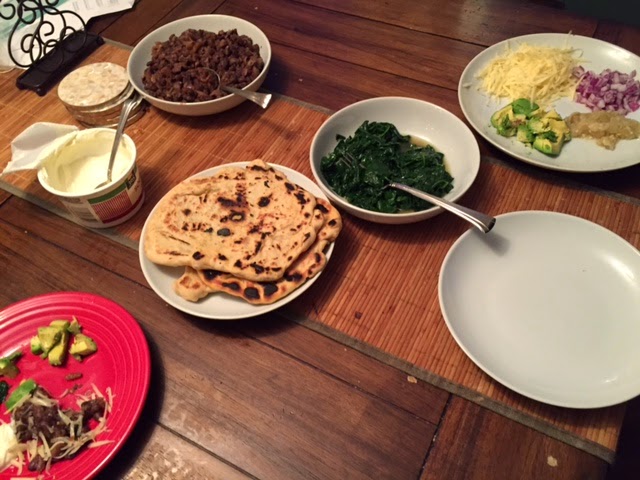 When we were first together Paul thought he hated refried beans. I think that's because he had never had homemade ones before.  Now he loves them.  I used some home cooked beans that I happened to have in the freezer, and these came together quiet quickly.  I loved the idea of halving and grating a tomato directly into the pan.  So much easier than peeling! 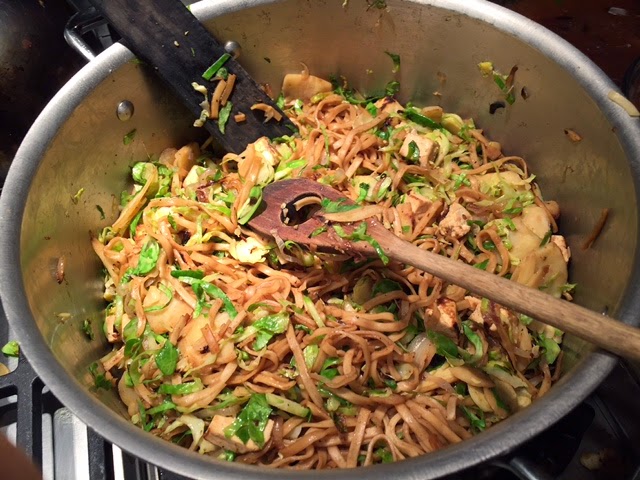 With the help of my food processor to shred everything, this was a relatively quick weeknight dinner.  While I made this, Paul made the grapefruit and avocado salad.  To give her something to do, we put some broken bits of dried pasta in a pot and asked Charlotte to "cook" pasta.  She loves to "cook,"  She had lots of fun stirring, and then adding "salt" to the pasta.  (I should probably be more concerned about how much she loves to add salt to everything!)  This kept her entertained for at least a few minutes while we managed to get the dinner on the table.  I definitely liked this pasta, but I bumped it in my rankings because Paul absolutely loved it, and he's not generally a fan of Chinese food.  It's nice to have a quick, Chinese-like option that he actually enjoys. 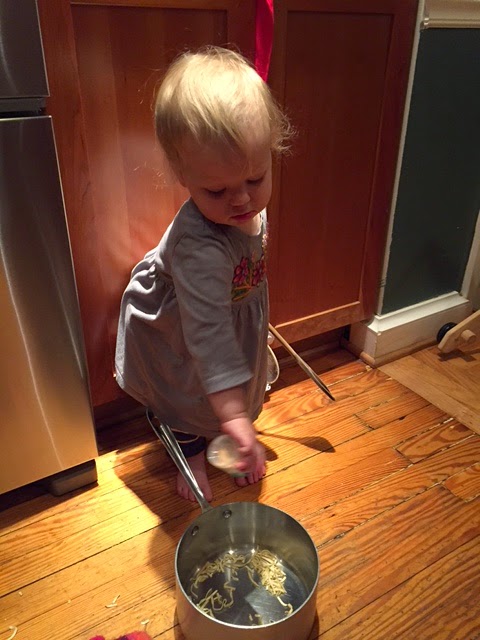 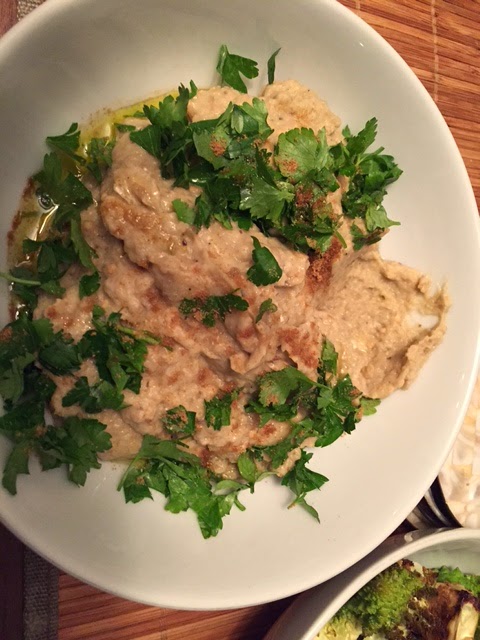 I think I would have rated this even higher if I had served it with some of the delicious homemade flatbread.  Unfortunately I didn't plan very well, and we just ate this with spoons.  The flavor was still great.  I loved the idea of broiling the eggplants.  It was easy, and gave the whole dish such a great smokey flavor.


#7) Avocado and ruby grapefruit with chilli 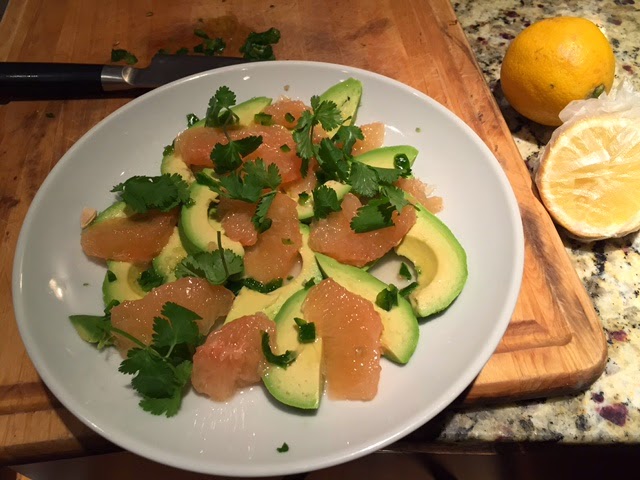 This was delicious, but dropped in my rankings just because I've had very similar salads so many times before.  Citrus and avocado are a great combination.  Definitely to be repeated often. 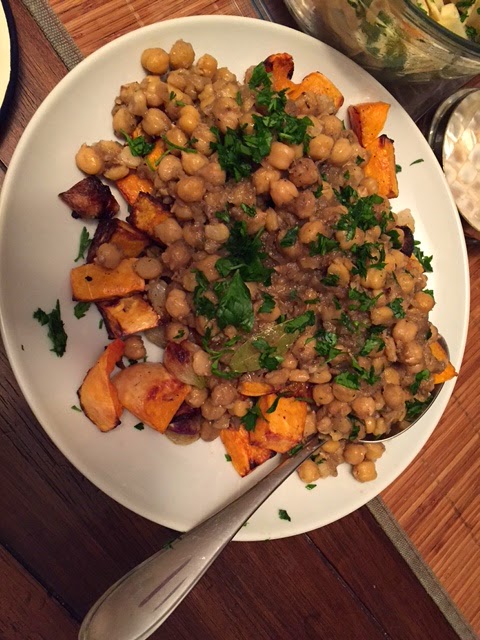 This really was a great month.  This dish fell in my ranking, but it was definitely one that I enjoyed and would make again.  I soaked and cooked the chickpeas ahead of time, and chopped the squash before I went to work in the morning.  After I got home I threw the squash in the oven, and set to finishing the chickpeas and making a side dish.  This wasn't quite quick enough for a typical weeknight, but it was good.
#9)Celeriac with apple, raisins and parsley 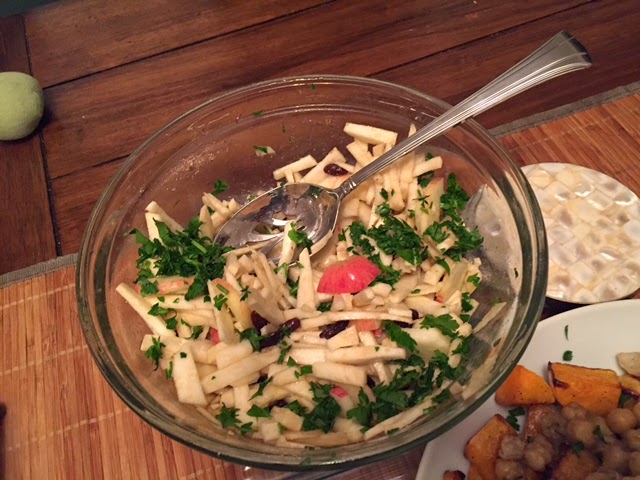 I'm going to attribute this one to user error.  I was too lazy to get out my mandoline and tried to cut the celery root by hand, and it really needed to be finer.  The big pieces were kind of awkward to chew, and didn't soften very much in the dressing.

I forgot to take a picture!  I liked the soup, but the horseradish cream was definitely the take-away here for me.  It could spice up a lot of dishes.
Posted by Jora at 1:06 PM 5 comments: