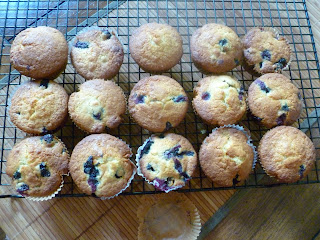 As I've written about before, I'm not what one would call a flexible person.  I like to follow instructions and rules, dot my i's and cross my t's, and seemed to have completely missed my rebellious phase (or maybe it's yet to come?).  When it comes to cooking, this means that I usually try to follow recipes exactly.  I'm trying to learn to be more flexible and at least make simple substitutions based on what I have available, but I rarely think to tinker with a recipe just for fun.  Paul, on the other hand, is much more creative in the kitchen.  He's always suggesting modifications to recipes, and will often read through and combine parts of several recipes for things that he's really into making (such as bread and pizza).  Paul went through quite a lemon zest phase several years ago.  I'm not sure if he had ever had it before, and once he tried it he was hooked.  No matter what we were making, he would always ask whether I thought we should add some lemon zest.  It drove my rule-following self absolutely crazy.  I remember getting into serious arguments over whether we should add lemon zest to muffins, scones, and pancakes.  Well, why am I bringing this up now?  I thought the Blueberry Muffins recipe could have used some lemon zest!  Or orange zest, oats, or whole wheat flour.  Something to add another dimension to the flavor profile.  While I definitely enjoyed the muffins, especially the very light and airy texture, I thought that they were a little one-note.  In general, this would be my main critique of Baking with Julia so far.  I think that the recipes have worked and have generally been good, but many have felt like they mainly tasted buttery or sweet, and could have used an additional flavor. 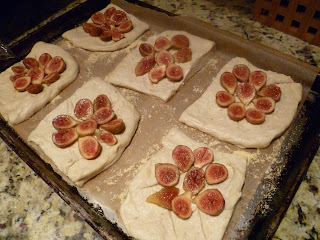 Last time we had a "Choose your own Adventure Week" the over-achievers in the group made me me feel bad for not having made both recipes.  Since it was Labor Day weekend and I had a little extra time I decided to make the muffins on Saturday morning and the Sweet Fougasse on Sunday night.  For the Fougasse, I decided to use the figs which are finally ripe on our tree instead of going out to buy berries.  I thought the figs worked beautifully.  My only complaint is that the streusel covered them up.  The finished pastry was not nearly as pretty as the working version.  It will probably be a long time before I make these again--they are enormous, and after splitting one we now have 11 downstairs in the freezer--but I do think they're something I would make again.  I enjoyed the mildly yeasted taste of the foccacia with the sweet fruit and streusel, and thought that they were relatively easy to make once the foccacia dough was ready. 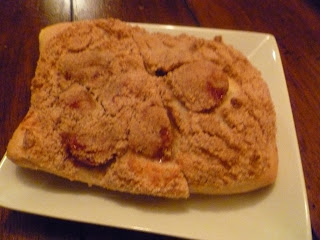