I managed to get a little bit behind with my baking over the summer.  Here is my catch-up post.  Hopefully I'll have an easier time staying on track this fall. 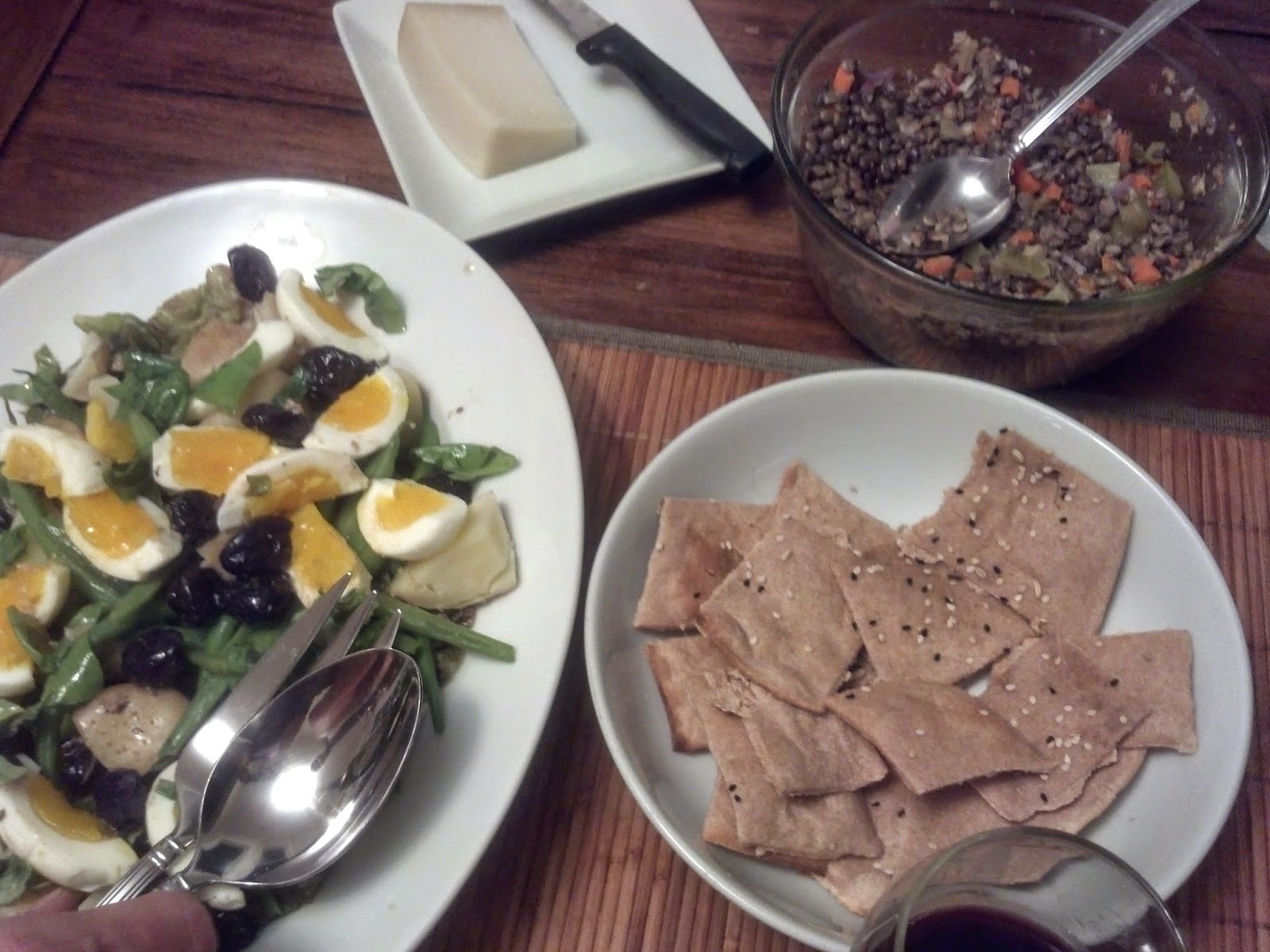 When the group made these, I was in the midst of preparing for Charlotte's first birthday party.  I had already selected a (slightly) different wheat cracker to bake for her party, and couldn't seem to convince myself to make these instead.  I planned to try to make both, but ran out of time.  I made them recently, to go with fish-free nicoise salad and French lentils.  These were fine, but nothing to write home about.  They weren't as good as the ones I made for Charlotte's party.  I'm willing to take responsibility, though.  I don't think I rolled them thinly enough. 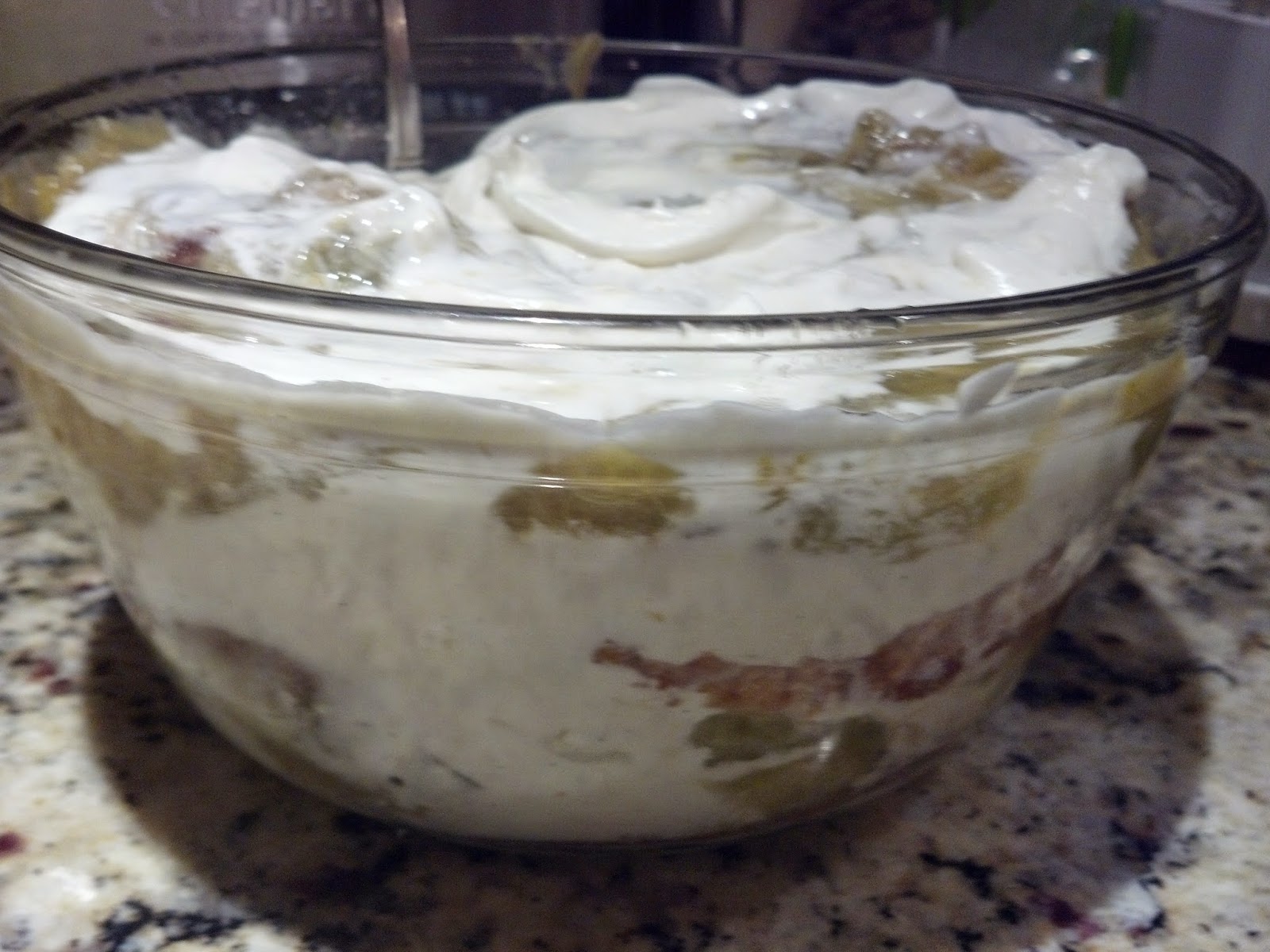 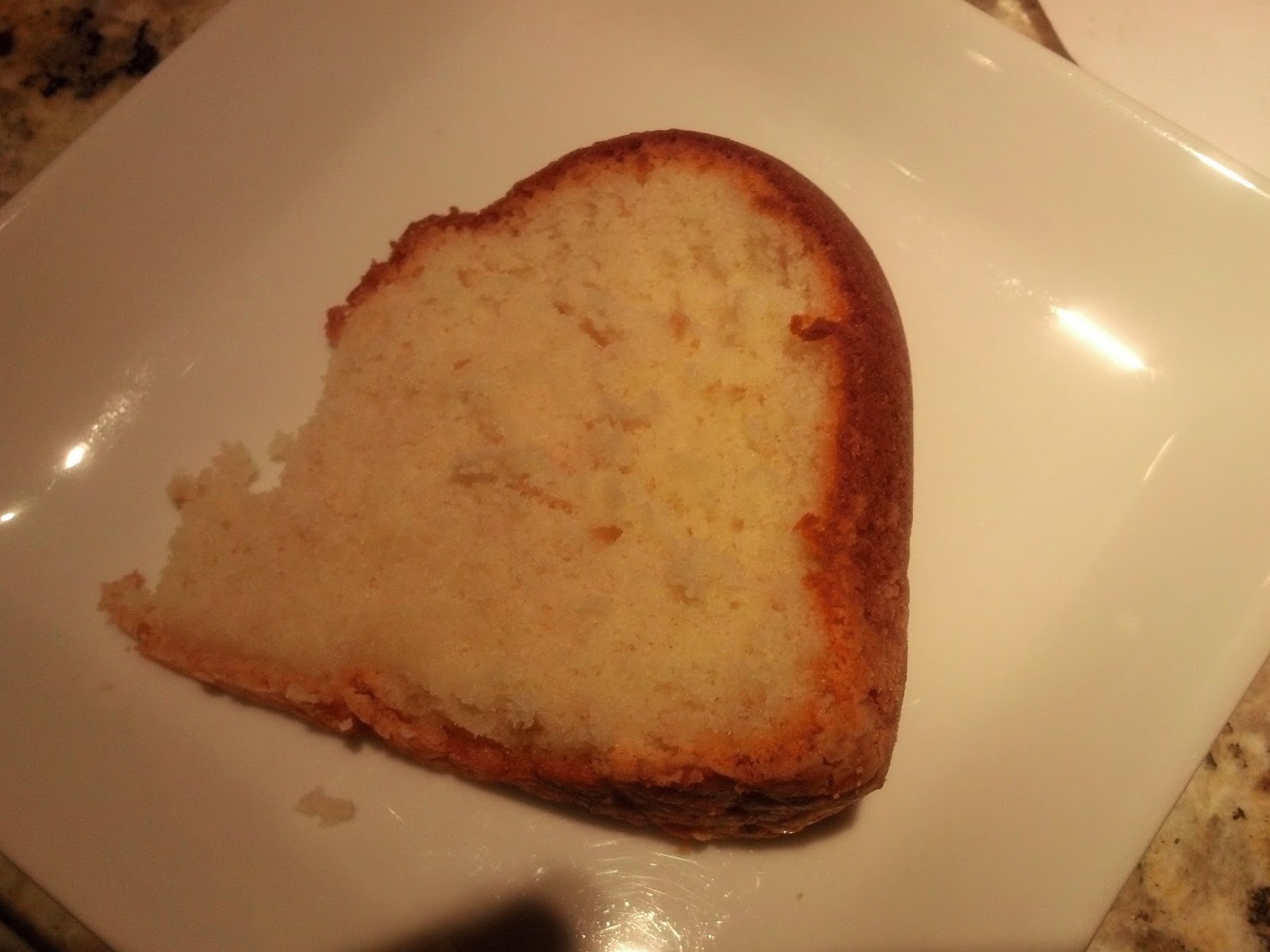 I can't remember why I couldn't seem to make this one on time.  In the summer we do a lot of fruit desserts and ice cream, so I think I was just having trouble getting too excited about pound cake.  After reading everyone else's posts, however, I decided I had to give it a try.  I have to say, it was a good, plain pound cake.  The texture was delicious.  I think I have to admit that plain pound cake isn't really my thing, though.  I couldn't stop wishing it was Ina's orange or lemon pound cake.  I did turn the leftovers into a trifle with whipped cream and rhubarb compote.  I made the rhubarb compote with lime zest and juice, and a (relatively) small amount of honey so that it was quite tart.  It was a perfect complement to the sweet cake. 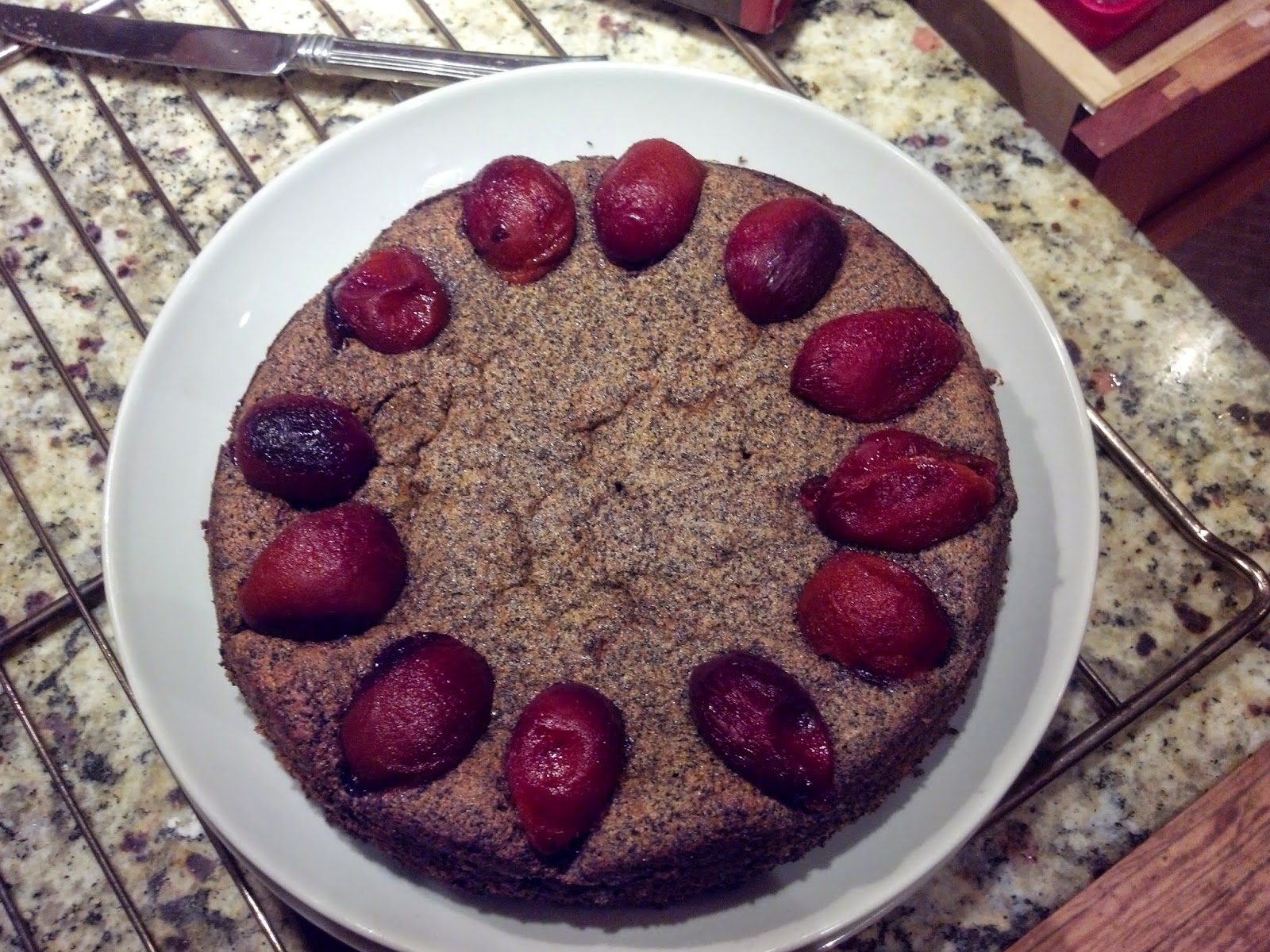 For some reason I was picturing a quick-and-easy poppy seed filled breakfast danish (does anyone know what I'm talking about?), so I was pretty surprised when I read the recipe the day before the group made this and realized how involved this was.  I didn't have any cake crumbs around the house, and just couldn't bring myself to go out and buy a cake just so I'd have crumbs to make this one.  I had tons of leftover pound cake, however, so I decided it would be the perfect ingredient in this recipe.  Unfortunately, by the time I got around to it my grocery store wasn't carrying apricots any more.  I substituted Italian plums instead.  I normally prefer apricots to Italian plums (Paul would disagree), but I thought the poached plums were perfect in this dessert.  I love poppy seeds, and thought this cake was delicious.  The light, airy texture was a pleasant surprise.  Paul tasted it and told me that it was baked perfectly.  That's his nice way of telling me that it isn't my fault, but not his favorite dessert.  (I've had many years to train him!  He also still ate plenty of it.)  I also brought a slice to my co-worker who said it was good, but would be better with less poppy seeds. 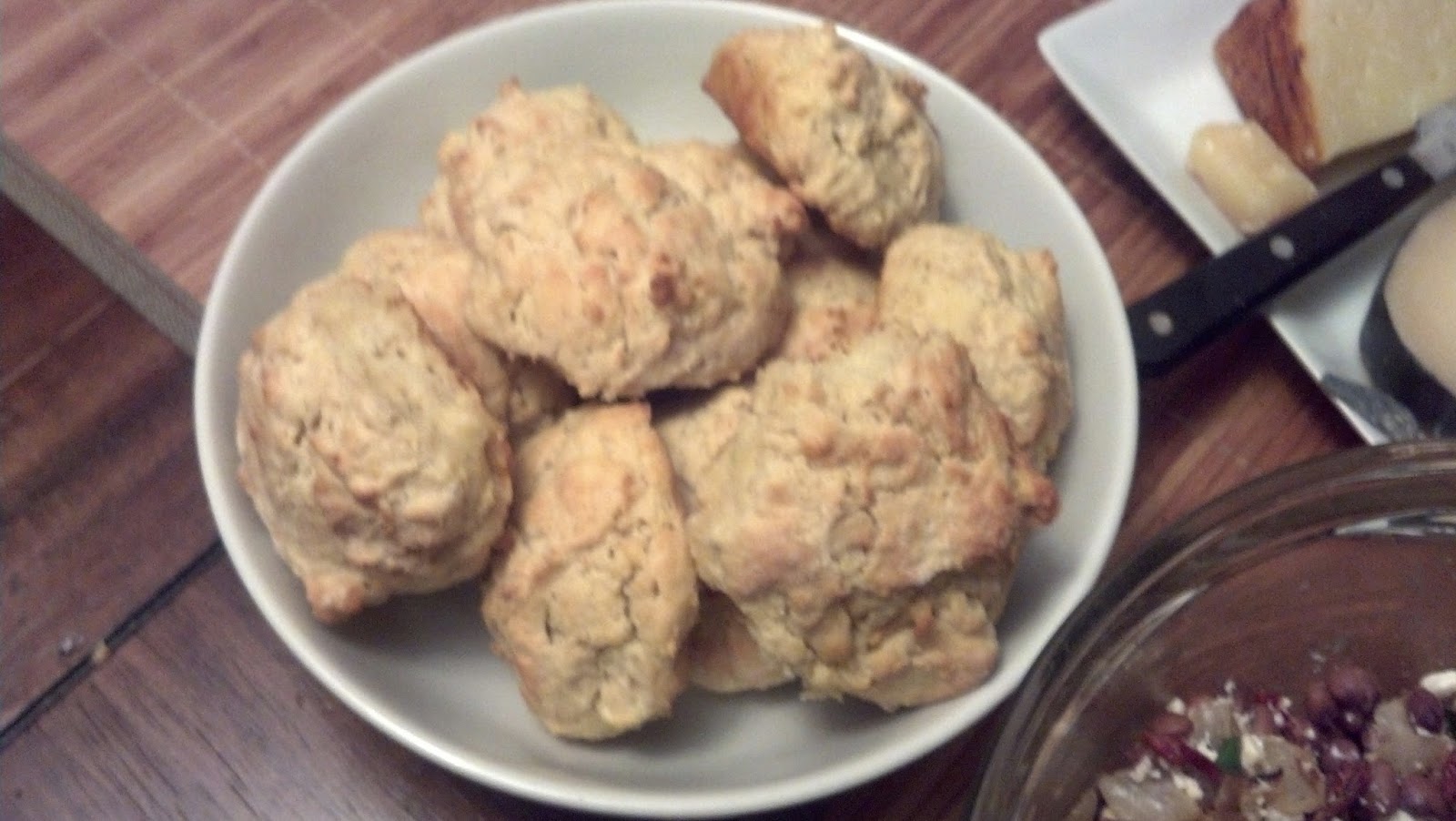 What's not to like about biscuits?  I substituted butter for the shortening, and still thought these were delicious.  We're big fans of biscuits.  Our favorites are angel biscuits, but I also make a low-fat one with buttermilk, cream biscuits, cream cheese biscuits, sweet potato biscuits, etc., etc.  I doubt I'll make these again--there are just too many good biscuit recipes out there--but we definitely ate them happily.